Herb Naziel, wearing a blue blanket with green sequin frog and many coins and eagles, said that the pipeline would destroy his healthy lifestyle and his healthy eating.  Debbie Pierre presented a petition that has been submitted to the UN Commission for Human Rights, which led to a discussion of whether it could be admitted because the time for submitting evidence was past. 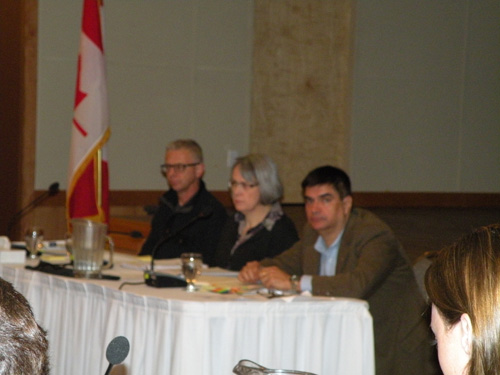 A child, Tieasha Pierre, said that it is only okay to kill what you will eat and the pipeline could kill many things that could not be eaten. Stanley Namox said, “Chiefs, lady chiefs, children of chiefs, I have a heavy heart about what they want to do on our land. We get our food from our land. This is a big project and it is dangerous.”

Marjorie Dumont (Chief name Many Leaves, Beaver House, Father called Big Man, Mother called Echo in the Valley) described how her grandfather taught her how to honor the day, how to make the “A” frame from the spruce trees, how to make a pack from spruce trees and how to make that trail down to the river. Her grandfather taught the kids where to set the net, how to set the net, when to set the net, a very spiritual process done with great respect for that river. She said, “The pipeline threatens my livelihood even before it bursts. A lot of the ecosystems are going to be destroyed. I worry about that. I worry about the ancestors who have been buried in our territory. That’s our graveyard and that’s our dinner table. Our blood stays pure only so long as our water stays pure.” She listed social impacts of the pipeline, including diminishment of the power and authority of the chiefs, the increased likelihood of depression among youth who lose their identity, and the money that would exacerbate drug and alcohol problems. 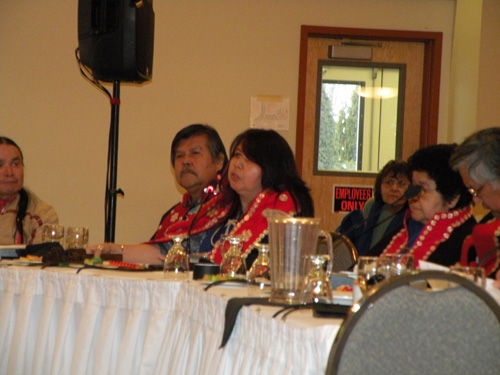 George Williams pointed out that the Bulkley Valley is the headwaters for the river system that drains to Prince Rupert and the headwaters for the Fraser River as well. Many people would be damaged by the risk of an oil spill. “Harper should come to our territory and put on a feast and let us know his plans,” Williams suggested. Lillian Lewis said the pipeline was supposed to go through a place known as Footprint, which is the clock of their elders long ago, known from stories about how elders told time when they wanted to go hunting fishing.

Chief Alfonse Gagnon told how, when Enbridge first proposed the pipeline, the Wet’suwet’en researched the oil sands. They flew over the oil sands and talked to the Fort Chippewa people. “We seen the devastation sitting there at oil sands,” he said. “Those big berms by the Athabasca River. We looked at the effects on the people that are living in the area. Their water was poisoned and they were getting strange cancers. It was devastating to our ears. The Athabasca delta produced everything in their life: muskrat, beavers, ducks, provided everything they needed. It was hard to listen to the answers to our questions. I asked, “What is your biggest fear if they keep producing oil sands above you?” They answered, “Our biggest fear is that we will be relocated.” 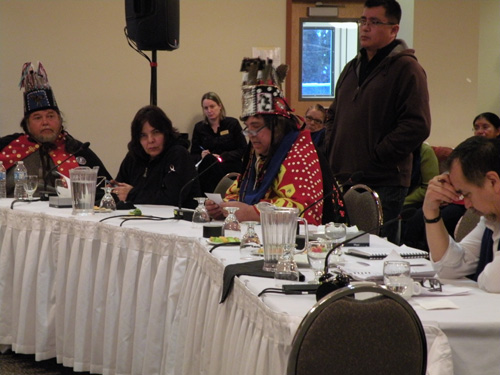 Chief Gagnon continued, “I would be devastated if we were removed from our land. It is who we are.” He criticized Harper’s comments about radicals who want to stop the project. “I’m worried about the money that Enbridge spent trying to promote the project,” he said. “Who is giving the money for ethical oil? Who gave $80 million to Enbridge to push forward with pipeline? The Prime Minister makes it look like pipeline opponents are making the government victims. It’s important to understand who the victims are. We’re the victims.”

Teresa Tait-Day said “We aren’t worried about the pipeline’s two inches of land. We are worried about our entire relationship with everything. We need to live off the land and sustain ourselves to be who we are. Don’t hold money in the highest regard, hold people in the highest regard.” Adam Gagnon said, “The representatives of Enbridge here have asked for the last eight years. I’ve sat with them in meetings. We’ve told them no. It’s not respectful to keep asking. What part of no do they not understand? They try to sell dreams to people who are poor, that this wealth will make their life better. Give poor people money and their life doesn’t get better it gets worse. We’ve seen that time and time again.”

Gary Ducommun of the Métis Nation of BC also spoke to the importance of wildlife for food. He saw the pipeline threatening moose with new access to their areas. 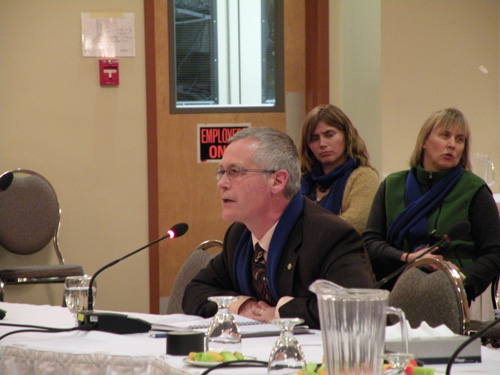 Doug Donaldson, MLA, characterized the wild salmon of the Bulkley Valley as a national treasure worthy of a fight for protection locally, regionally, provincially, nationally and globally, because there is next to nothing left like the intact ecosystems in northwest. He concluded that, if the JRP considers everything they heard, they will decide that the risks of the Northern Gateway pipeline far outweigh the benefits.