"Ethical Oil: the Puppet Rap" is a creative video response to CBC Power and Politics Host Evan Solomon's interview with then-Ethical Oil spokesperson Kathryn Marshall that took the online media by storm after appearing in The Tyee earlier this year. Journalist and documentary filmmaker Kai Nagata took time out of his busy schedule for the lively interview that follows.

Christine Leclerc: I was so excited to see someone use Solomon's Marshall-Bennett interview in a creative work that explores Ethical Oil's January 2012 attacks on environmental organizations. How did the idea for the puppet rap emerge?

Kai Nagata: There were a lot of people sharing that interview around on Twitter and Facebook. I watched it a few times with a mixture of horror and fascination. Not long afterwards I was drinking beer with Caitlin and Dave and we got into a discussion of the Petro State—by which I mean the coordinated corrosion of democracy and public discourse that seems to be the hallmark of countries with too much private oil wealth.

I pulled up the video and watched their eyes kind of bug out as they watched it. Dave said something like, "Wow, I knew things were bad, but not that bad." Caitlin was pretty much gasping for air. I said, "Do you guys want to do something with this?" It may have been the beer talking, but they said yes, 100 per cent.

We mulled it over and after a while some rhymes just started popping into my head. We all kept in touch by email. I got my sister's boyfriend to start fiddling with some beats and we gradually put the song and video together over the course of the next couple months, in our spare time. 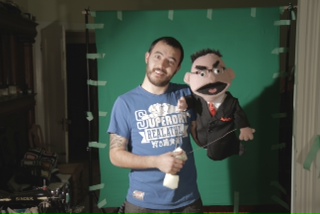 Photo of Kai Nagata with a puppet of Ethical Oil's Ezra Levant by David Henderson-Hean.

CL: I've spoken with Sun Media reporters who scoff at the suggestion that they would so much as glance at Ezra Levant's show or columns. As someone who has worked as a reporter, what do you think of Levant's practice?

KN: Well, as John Doyle has pointed out, Ezra Levant's trajectory over the past year has been pretty sad. He used to be a real force to be reckoned with. He single-handedly forced this twisted fair-trade idea of "Ethical Oil" into the public conversation. Mainstream outlets treated him as a credible voice. Hell, I interviewed him for CTV, at a talk he gave in Quebec City. I remember we got along quite well. I thought his ideas about energy policy were flawed and dogmatic, but I found him to be quite lucid.

I don't know who he thought I was—I was a young, Western Canadian reporter with a crew cut and a cultivated, casual disdain for lefties. I had joined the infantry reserve before getting work as a broadcast journalist. The hardcore right-wingers I met really took a shine to me. Perhaps Ezra thought I was some kind of Alykhan Velshi type who had snuck into the "lamestream media." Certainly the ferocity with which he has gone after me on his show and in his blog would suggest a kind of betrayal, a mixture of fear and anger that is pretty disturbing to realize is aimed right at you.

But yeah, he's a clown now. I don't know what his pull is these days in the PMO or that core Calgary power circle that runs Ottawa, but on TV he looks desperate, lonely, and somewhat unhinged. I think, as Doyle suggests, it's the phenomenon of having to come up with material—and enough manic energy to deliver it—five days a week.

When he first got the show, I told him on Twitter that "the novelty will wear off," and I think it has. Having worked in that world, I have a lot of compassion for him as a person. As a journalist—well, he's not a journalist. Comparing him to journalists would legitimize his weird brand of entertainment. He's an ex-lobbyist with mediocre ratings on a channel that was dropped from the parliamentary press gallery's cable package because it was irrelevant. If I worked for Sun doing actual journalism—which some people still try to do, bless them—I would ignore Ezra too.

CL: What role do you see for storytellers and reporters who are convinced by evidence of disease, cultural devastation, habitat fragmentation, carbon sink destruction and climate change that the tar sands are a dead end road?

KN: We're at a really interesting juncture right now in North America. People are coming to terms with the fact that this is no longer an intellectual debate between equals. The old brand of "he says, she says" journalism is particularly ineffective in covering the Petro State, which indeed leads to the parody of traditional journalism that Sun News has become.

What you have is a war between money and evidence. The money (which is for all intents and purposes unlimited) is being spent to spread disinformation, poison the public conversation, and destabilize democracy. The evidence, the hard data, points to the tar sands being a total dead end—fiscally, spiritually, environmentally.

You have credible, experienced scientists saying increasingly strongly that these reserves actually threaten human civilization—James Hansen, the NASA climatologists, calls the tar sands "game over for the climate". A decade ago that would be dismissed as crazy talk, but more and more scientists—at least the ones whose research isn't funded by the Koch brothers—are overcoming their natural fear of controversy and saying "I take the side of humanity, of survival, versus the apocalyptic greed of these oil companies."

And journalists and storytellers are starting to let it sink in, and realize that it's not an academic debate, that one voice does not balance the other, and that they're watching a battle between right and wrong, that people are starting to choose sides. I don't think that's a sacrifice of journalistic ethics, I think it's the ultimate fulfilment of a code that pledges to serve the public interest against all odds. So the role I see of those storytellers is to collectively shift the discussion, to push back against Petro State propaganda, and to inform their friends and neighbours enough so that we stand up and demand that our legislators do whatever they still can to curb the slide towards destruction.

In the civilizations that have survived so far on this planet, the power of stories can't be underestimated. It's literally what has allowed nation-states to flourish. So if we're going to survive the next generation or two on this planet, those storytellers are going to be very important.

I'll issue a caveat—right now, to be frank, our methods aren't working. We haven't found the tools yet that will push us to a tipping point in public opinion. So we must continue to innovate. We are obliged to keep finding new ways to reach people, to educate and inform, to change minds. To do that, we all have to pull in the same direction. It's never too late to get off the fence and lend a hand.

CL: If you were to create an energy revolution themed muppet show which characters would be “must-haves” on the ensemble?

KN: Haha, everyone is going to have their own favourites. I think if I were writing for a Canadian audience, I'd have a little Alison Redford/Christy Clark sort of Punch and Judy segment. You'd need the Ottawa clique too—Stephen Harper and his core band of enforcers—Joe Oliver, Peter Kent, Jason Kenney, John Baird. Elizabeth May would have to be in there—I imagine her as a bespectacled mermaid who has a real hard time in the world she's been thrown into. David Suzuki, Bill McKibben, the Dalai Lama.

On the lobbyist side you'd need a sort of "At Home with the Marshalls" segment, featuring Kathryn and Hamish. Ken Boessenkool, definitely. He's going to be a major figure in the next couple of years. Alykhan Velshi. Ezra, obviously. Maybe the boys running Ethical Oil these days (luckily they look strikingly like muppets already). You'd need a whole band of indistinguishable Chinese cadres in black suits, and a pack of slick, identical K-street operatives lurking around. Sort of a spy-versus-spy subplot between the dudes from Beijing and the dudes from Washington.

And just personally, I would love to have Pierre Poutine in there serving as the glue between all the different sub-factions, doing the dirty work. I imagine him as a dirty, poutine-gobbling lumberjack who lives in a garbage can, with a bunch of disposable cell phones and all the tools to break into cars and hack phones and spy on everyone. He's the one they blame for everything, but whenever the police or Elections Canada gets close to catching him, he hides in his dented garbage can and they run by.