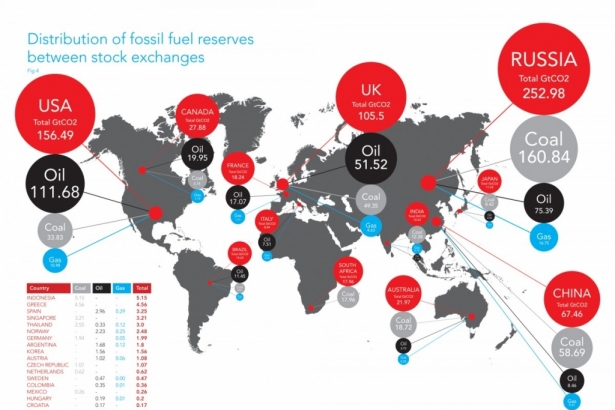 Fossil fuels are the second biggest contributor to the TSX. Fossil fuel stocks may be over valued by as much as 60%.

Fatih Birol, chief economist of the International Energy Agency, told participants at the latest round of UN climate talks that about two thirds of all proven reserves of oil, gas and coal will have to stay in the ground to hold global warming to two degrees Celsius. He said this should be an “eye opener” for pension funds with significant investments in the energy sector. Coal is considered a particularly poor investment.

Fossil fuels are the second largest contributor to the TSX and many Canadian pension funds have significant fossil fuel holdings. According to the Canadian Centre for Policy Alternatives, Canada’s share of the global carbon budget is close to 9 gigatonnes based on its world share of GDP or 2.4 gigatonnes based on its share of world population. Were it allocated the higher number, 9 gigatonnes of the world’s carbon budget, 78 per cent of Canada’s proven fossil fuel reserves would have to stay in the ground.

Nick Robins of HSBC Bank has pointed out that fossil fuel companies are still valued as if all their known reserves were going to be exploited. This results in stock markets over-valuing fossil fuels, thus creating a “carbon bubble.” The U.S., Canada, U.K., China and Russia are the most vulnerable as they have the highest distribution of fossil fuel reserves among the stock exchanges.

Institutional investors are beginning to show concern. At the annual shareholder meeting of Consol Energy in May, about 20 per cent voted for a report on how Consol would respond if some of its reserves became unusable. According to Russell Gold of the Wall Street Journal, this vote showed that “a small but not insignificant minority of institutional shareholders saw some merit in at least looking at the question of how much coal the company will be able to burn.”

According the IEA chief economist Birol, “Globally, the direction we are on is not the right one. If it continues, the [temperature] increase would be as high as 5.3 degrees – and that would have devastating effects on all of us.”