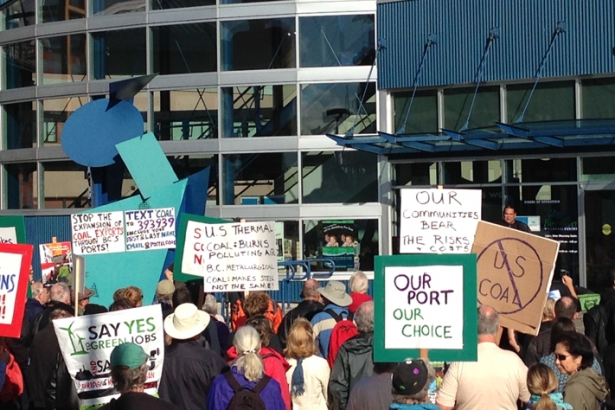 First Nations leaders, MPs, MLAs, neighbours and community groups gathered on a beautiful afternoon to oppose the Fraser Surrey Docks coal terminal proposal. "The coal industry wants to paint us as fringe groups," Kevin Washbrook of VTACC said. "It's just not so."

About 350 people gathered at the New Westminster Quay to show their opposition to the Fraser Surrey Docks proposal for a new coal port in Surrey and, more generally, in protest against the Port of Metro Vancouver’s “closed door” decision making. Community representatives, both elected and grass roots, told the cheering crowd that a system in which communities can no longer be heard regarding industrial projects that will affect their health and quality of life is a broken system.

Paula Williams, founder of Communities and Coal, obtained 11,000 signatures on a petition opposed to the proposed coal terminal in less than three months. “PMV will decide the fate of Fraser Surrey Docks,” she said, “but it will also decide the fate of White rock, Surrey, Delta, New Westminster, the communities along the Fraser River, Texada Island, and its neighbouring communities. But these communities do not belong to PMV. They belong to us.”

CaroleAnn Leishman from Powell River asked, “Why is our regulatory system so messed that a project of this scope, bringing thermal coal from Wyoming all the way up here on open trains putting it there open barges up the Strait of Georgia to Texada Island where its offloaded into huge 60 foot high piles, where the winds regularly blow more than 40 km/hour, then to be loaded back onto huge freighters to go to Asia, how does a project like that not trigger an Environmental Impact Assessment?”

Climate advocate Kevin Washbrook of Voters Taking Action on Climate Change, had a message for all the big players in FSD’s coal terminal proposal. To the CEO of the Port Robin Silvester, he said, “We don’t share your dreams for our range and we don’t like being shut out of the decision making.... [U]ntil you include us in meaningful decision-making, we are not going to go away.” He wished Jeff Scott, CEO of FSD well. “We want you to thrive, but not at the expense of our communities and the climate. Find another focus for your business.”  To the American interests, Warren Buffett’s BNSF railway and the coal companies, he said, “We will do everything we can to delay and stop your plans to ship your dirty product through our neighbourhoods. This is a bad investment of your time and resources.”

Dr. Pargat Bhurji, a pediatrician from Surrey, explained how coal dust affects the lungs and hearts, particularly for children. “Coal dust is dangerous,” he said. “Why do we want to escalate health care costs and give asthma to our children for a few jobs?” He mentioned studies that show both a decrease in IQ of children exposed to coal dust and a shortening of life expectancy. 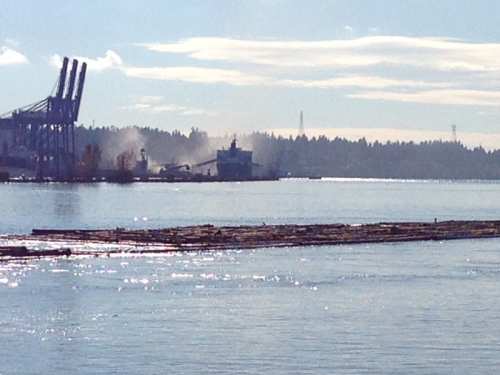 The primary concerns expressed were health impacts of US thermal coal on BC communities, the lack of environmental assessment, the Port’s governance model (including its refusal to hold public hearings and the conflict of interest inherent in making decisions that impact its financial status), and the Port’s apparent willingness to sell out local quality of life for big business profits.

“The people who would make billions of dollars on this don’t care about contaminating our drinking water or the agricultural lands their train cars will come through,” Leishmann of Pebble in the Pond Environmental Society declared. “They just care about getting richer on the backs of workers and the communities where the impacts will be felt.”  She said that Lafarge, which would operate the Texada Island portion of the operation, had received a letter from a health officer in 2009 regarding heavy metals in the Texada drinking water as a result of their operations, but no action had been taken. Coal moving through Texada would increase from 400,000 tonnes of coal mined on Vancouver Island and metallurgical coal, to 8 tonnes of US thermal coal, or, eventually, even 16 million tonnes.

VAPOR BC was also present to express concern about a proposal to ship billions of litres of highly toxic and flammable jet fuel up the Fraser River. The project proponent, a consortium of airlines in search of cheaper fuel, has made assurances that any spill would evaporate without causing damage. But Otto Langer, a retired DFO biologist, tested the claim by taking water from Lemmon Creek 67 days after a 10,000 litre spill of jet fuel. He found no life downstream of the spill and the sample he took smelled strongly of jet fuel, after more than two months. “The industries’ own studies show that 2,000 litres will spill every six years,” Scott Carswell of VAPOR said. “And that doesn’t include a catastrophic spill. But there are conditions here that are beyond their control. It’s not unusual for barges break in loose in storms. We are risking our heritage when we put the incredible Fraser River salmon runs at risk.” 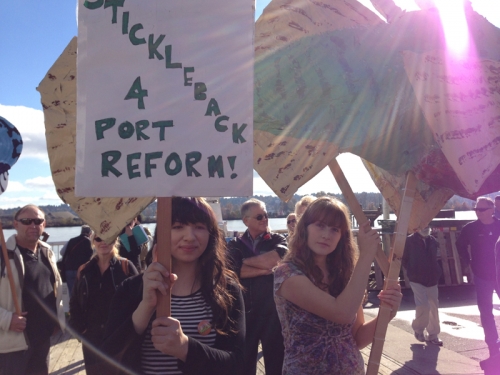 Carol Day, President of VAPOR, became involved when a jet fuel pipeline was planned through her neighbourhood. “I’m a sign-maker by profession,” she laughed pointing at some placards, “which has come in handy.” There’s no longer a pipeline proposed through her neighbourhood, but the Port’s lack of accountability to the public troubled her and so she remained involved. “We want to support the Port,” she said, “but certainly not at the expense of everything else.”

The Port itself envisions a sustainable future without fossil fuels, although it plans to go forward with “business as usual” in the meantime. It is creating a land use plan based on this divided vision, which provides a rare opportunity for the public to demand responsible decisions regarding fossil fuel infrastructure. Federal statute requires a “public meeting” (it doesn’t mention an open house, the Port’s preferred method of public contact) and the Port will be seeking public comment in November. To receive information regarding the upcoming comment period, subscribe to updates at the Port website. 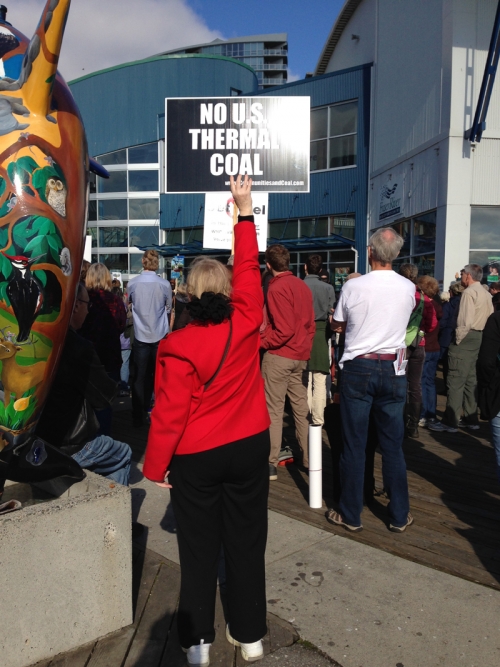