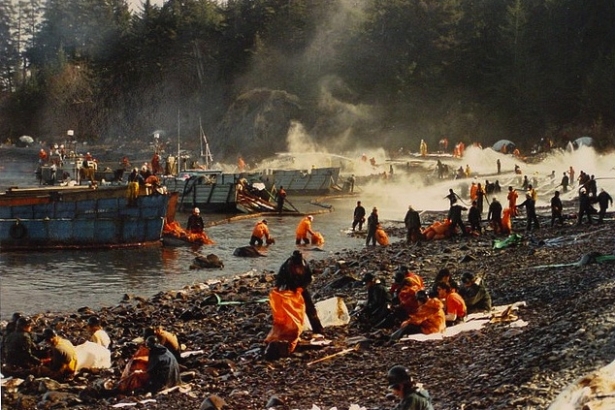 As the Exxon Valdez oil tanker bled 750,000 barrels of crude into Prince William Sound, a child was about to be born into a very chaotic world. That child belonged to William Bixby, a local attorney in the town of Valdez, Alaska.

As he’s watched his daughter grow up over the past 23 years, Bixby has also watched local communities transform, families break apart, litigations drag on, and hopeless workers turn to drugs and alcohol.

When the ship ran aground, people around the world followed the progress on their TV screens, terrified at the images of environmental destruction. They saw the oil-soaked birds and animals, the frantic cleanup efforts and the hasty retreat of Exxon executives who assured the world that they would make it right.

Bixby participated in the spill’s legal aftermath, representing about 1,200 commercial fishermen from communities around the affected area.

“The appeal just ended a year ago,” he said, recalling his experience during an interview with the Vancouver Observer.

“I could tell how long this case was by looking at my daughter…she’s a young lady now.”

Following the spill, Bixby says, there was chaos. It was late March, 1989. Valdez—a town that at that point was only home to about 3,000 people—became a central hub of activity when the cleanup began.

“The population grew to between 11,000 and 12,000 because the initial blast of workers was being dispatched through Valdez,” he said.

“And the town just didn’t have the infrastructure to handle that many people. Spare rooms, living rooms; any place was being rented out for people to stay. Mobile restaurants came in to feed the people.”

He remembers the way Exxon dealt with the mess when they swept into town.

“The way they were operating was: ‘Let’s employ as many people as we can, we’ll pay them a lot of money, and they’ll be working a lot. So when it’s time for us to sneak out of town, everybody’s pockets will be filled with cash and they’ll be tired. We’ll promise to come back next year, and away we go’,” Bixby said.

Exxon’s communication strategy with regard to the public, Bixby says, was was “insulting”. They brought their scientists in from down south, ignoring the suggestions and input of well-trained local experts who had an intimate knowledge of the area and its ecosystems. The company held meetings with residents, pledging compensation, but the insincerity of their assurances soon became clear.

“I remember going to Cordova, which is the fishing community in Prince William Sound. It’s a one-product town, and that’s fish,” Bixby recalled.

“They held a town meeting in the gymnasium, and the place was packed. [Company officials] were promising everything—we’re going to clean this up, we’re going to make it right with you people. Everyone will be compensated for their damages.”

What Exxon did do, however, was bring in insurance adjusters to urge townspeople to sign legal agreements, attempting to trick them into accepting “advance” payments that would prohibit them from seeking further damages.

At the time, it was difficult for people to know just how deeply they would be affected, or how much money they could expect to get back.

“No one had any idea what the damage was. The spill kept on spreading,” Bixby added.

While at first it was contained within Prince William Sound, the oil eventually made its way far past the spill site covering 2,100 kilometres of coastline and 28,000 square kilometres of ocean. For a regional economy that had always depended on fishing and tourism, the impact of this horrific event could barely be imagined.

The full extent of the damage may not have been evident right away, but what was immediately clear was that the fisheries couldn’t function.

“They started shutting down fisheries immediately. The bottom of the food chain, as far as most of the fish went, is herring. And it was herring season, when this thing happened,” said Bixby, whose clients were among the thousands of fishery operators that lost millions of dollars in business.

Only 10 per cent of that year’s herring population survived to return from the open seas, he explained, and about 60 per cent of those were diseased. And although following years saw the return of healthy herring that had hatched in seasons past, after a while, the fish were no more.

“There has never been a herring season in Prince William Sound after 1994…at all, even now,” Bixby said.

The legal battle after the oil spill

Before the spill, Bixby says he was the only attorney in all of Prince William Sound. It didn’t take long for other spill-chasing lawyers from out of state to flock to the region, laying the groundwork for what they knew could be the case of their lives.

In all, there were almost 33,000 plaintiffs involved in a class-action suit against Exxon. Bixby said there were seven different law firms that controlled the litigation, including his own, Bixby, Cowan & Gerry.