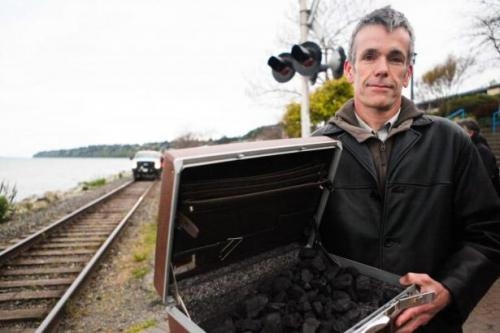 Kevin Washbrook protesting coal transport in Whiterock, BC in a photograph for the Vancouver Observer  by David P. Ball

Mayor Gregor Robertson has called for more consultation regarding coal transports through Metro Vancouver, citing the impact of coal on climate change and of coal dust on human health, agriculture and marine life.

In a letter delivered December 3rd, Mayor Gregor Robertson of Vancouver expressed his concern to Port Metro Vancouver CEO Robin Silvester that regional residents and businesses have not been properly consulted regarding two proposed significant expansions to regional coal exports.  In the letter, the Mayor asks the Port Authority to clarify its commitment to public consultation and expresses his hope that no decision will be made prior to community input.

Vancouver's request of the Port Authority was given strong endorsement by two prominent environmental leaders who came out in support on Wednesday, according to a press release from Kevin Washbrook, Director of Voters Taking Action on Climate Change.

"I fully support Mayor Robertson, and other regional Mayors and Council, in calling for a full public review of these coal export proposals," said David Boyd, environmental lawyer, SFU professor, and Co-Chair of Vancouver's Greenest City Action Team.  "Coal is a significant cause of climate change, and coal dust generated by train traffic and loading has major impacts on human health, agriculture and marine life.  These issues need a full public airing, much broader than the delivery of letters to port neighbours that has taken place so far."

David Suzuki also expressed his support for Vancouver's leadership in calling for full public consultation on expanded coal exports. "The challenge of climate change forces us to reassess our relationship with fossil fuels and this has to go on at all levels of government.  To be a green city, we have to lead the world in this reassessment,"  Suzuki said.

The letter delivered to the Port by the City of Vancouver is a significant addition to the call for Port Metro Vancouver to engage in broad public consultation on its coal export plans, Washbrook said. These plans, if approved, would make Metro Vancouver the biggest exporter of coal in North America.  This expansion of exports would result in increased coal train traffic through the region, with an attendant increase in the dispersal of toxic coal dust in regional communities.

Port Metro Vancouver has sole authority to approve these coal export plans, Washbrook said.  Currently, no public hearings or external approvals are required prior to a decision.  While the Port Authority has sent letters to port neighbours, nearby municipalities and First Nations advising them of these proposals, it has neither advised nor consulted the broader regional public on these plans.   But, Washbrook said, the Port Authority's mandate states that it is ‘to operate with broad public support in the best interests of Canadians.’”

Yesterday New Westminster Councillor Bill Harper called for a full public review of plans for a new coal terminal at Fraser Surrey Docks, Washbrook said.  New Westminster Councillor Jamie McEvoy also stated that, contrary to statements from Port Metro Vancouver, his city has not been consulted about the proposal.  Delta Mayor Lois Jackson has also indicated that she is very concerned about the plans, he said.

Voters Taking Action on Climate Change (VTACC) encourages the public to send letters directly to the Port Authority calling on it to hold full public hearings about these proposals, Washbrook said.  Copies of these letters are being collected and will be posted on line as a public record of concern.  In addition, VTACC continues to add signatories to the open letter to the Port Authority from community leaders, concerned citizens and climate scientists “asking that the Port do the right and reasonable thing: fully consult the public on decisions that have significant implications for our health and the future of the planet,” he said.

“VTACC thinks this is an important time improve and expand the Port Authority's consultation processes, and to give full public consideration to the cumulative health impacts of coal dust dispersal associated with expanded delivery and export of coal.  These recent export proposals are likely just the beginning.  There is heavy pressure to find an export route to Asia for US coal, and the PowerPastCoal coalition has so far been effective at delaying coal port proposals south of the border.  Westshore Terminals VP Dennis Horgan recently said that his terminal could export another 20 million tonnes/yr of US coal if he had the capacity,” Washbrook said.