British Columbia set to export mega amounts of carbon dioxide. Is that a plan? 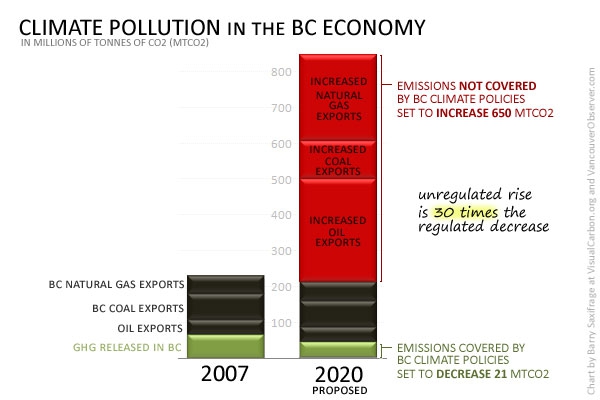 On BC's current trajectory, its climate legacy to the world will not be as a leader in a new, low-carbon society, but as one of the most entrenched exporters of globally destructive fossil-fuels.

British Columbia is gearing up to export huge amounts of carbon dioxide. These climate-changing emissions would come from the coal, oil and gas that we ship around the world. Is this the role that we want our province to play in our global future?

British Columbia currently has no plan for how our fossil fuel exports should fit into a responsible response to climate change. The strong opposition to the proposed Enbridge pipeline in northern B.C., the Kinder Morgan pipeline expansion in the Lower Mainland, and proposed coal port expansions in Vancouver make it clear that people in this province aren’t satisfied with that. Rather than debate each and every project, shouldn’t B.C. have an overarching plan for fossil fuel exports, one that has broad public support?

Doesn’t B.C. already have a plan?

In 2008, the provincial government announced its BC Climate Action Plan and promised to reduce carbon pollution. It was an inspiring and necessary action. But it also proved to be what climate activist Bill McKibben, in a talk to UBC students last year, called “gilding the lily.” On B.C.’s current trajectory, its climate legacy to the world will not be as a leader in a new, low-carbon society, but as one of the most entrenched supporters of a globally destructive fossil-fuel economy.

We export over twice as much carbon as we burn in B.C.

At the time it was announced, the BC Climate Action Plan covered 65 million tonnes of CO2 created by fossil fuel combustion within the province. That same year, B.C. exported enough coal, oil and gas to produce an additional 170 million tonnes of carbon pollution—more than twice the amount covered by the plan.

Under the current climate plan, B.C. committed to reduce carbon emissions by 21 million tonnes between 2007 and 2020. Yet if current proposals for fossil fuel infrastructure are approved, B.C. will increase its export emissions by 640 million tonnes. In other words, the overall emissions tied to the B.C. economy would nearly quadruple.

Decisions to build this infrastructure are being made right now, making this a pivotal time that could lock B.C. into financial risk, physical damage and international censure for decades to come.

Time for a plan that takes climate change seriously

What if the citizens of B.C. don’t want their province to be a climate villain? What if we want the leaders in this province to rigorously connect the dots between climate science, policy and action? What if we want every single permit and decision made in B.C. to reflect the ethical responsibility to maintain a stable climate?

The next government of British Columbia needs to make a citizen-led, all-party plan for climate action a top priority – and that plan needs to address the climate impacts of all the carbon that flows through the B.C. economy.

British Columbians can continue to battle each proposed pipeline, coal port and natural gas development—or we can come up with a plan that considers all of B.C.’s climate impacts. Does it make sense to expand fossil fuel infrastructure in a world that is preparing to radically reduce its dependence on fossil fuels? How much of the province’s natural gas will have to stay in the ground in order to achieve global carbon pollution reductions? What does a responsible export policy look like?