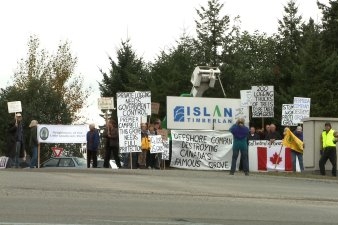 The transition to a sustainable economy can’t happen without the participation of big institutional investors like pensions funds. One of the world’s biggest pension funds, right here in BC, is invested in some of the most controversial and destructive companies in the province.

British Columbia Investment Management Corporation’s (bcIMC) beneficiaries worked in schools, colleges, municipal offices, health care facilities, the provincial government, public transportation and energy services. They may be surprised to learn that bcIMC is directly invested in the companies that are logging the heart out of Vancouver Island, companies responsible for the oil sands and its pipelines, companies that frack, and companies that mine and transport coal.

To be fair, bcIMC is a relatively good actor among pension funds. It is signatory to the UN Principles of Responsible Investing and prides itself on direct engagement with companies on issues of environmental, social and corporate governance (known as ERG). It signed the United Nations Environmental Programme’s Declaration on Climate Change by the Financial Services Sector and works with other institutional investors to encourage best corporate practices, carbon disclosure, and preparing for changes in fresh water supplies.

But what about those logging companies?

bcIMC is heavily invested in the “Big Three” timber companies that are turning Vancouver Island forests into real estate via the export of raw logs. bcIMC owns 25% of Island Timberlands (IT). IT owns 258,000 hectares of coastal forests. Communities that have opposed IT’s industrial scale logging of their home communities include Roberts Creek, Port Alberni, Oceanside, Cowichan Valley, Port McNeil and Nanaimo. IT’s logging of the magnificent Cathedral Grove also sparked protest and controversy.

bcIMC also is directly invested in Timber West which owns approximately 327,000 hectares of private land on the BC coast and owns over 5 million common Brookfield Asset Management shares. Brookfield-related companies own 51% of Island Timberlands and 86% of Western Forest Products (WFP).

TimberWest, Island Timberlands and Western Forest Products account for 80 percent of the logging on Vancouver Island, along with some pockets on the mainland coast and BC interior. These companies manage forests for top shareholder return at the expense of communities, ecosystems and the provincial job market. Vancouver Island trees from private corporate forest lands are increasingly shipped offshore. As a result, BC, the province with the biggest, most valuable forest resource in Canada, has a much smaller yearly output of value-added wood products ($345 million) than either Ontario ($928 million) or Quebec ($825 million).

According to the Canadian Centre for Policy Alternatives (CCPA), the “Big Three” are dramatically eroding the forestland base in BC. Research finds that: