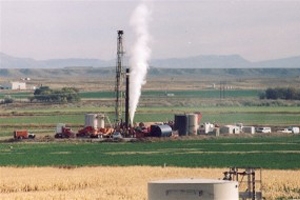 Natural gas has lost its place in the portfolio of realistic climate solutions. Experts now call it "the bridge fuel to nowhere." BC must choose between its expansion of natural gas for export and its own climate credibility. The first test: getting on track to meet legislated 2020 carbon targets.

Natural gas – it’s clean, it’s soft, and it releases less CO2 per joule of heat than any other fossil fuel when burned. BC has plenty, so we can help China reduce emissions by selling our clean natural gas to replace their dirty coal. This good turn for the planet is consistent with existing BC climate legislation. Last but not least, it will create jobs and royalties here in BC. So it’s all good.

Except that it’s really not. Some issues to consider:

Shale gas may do more greenhouse damage than coal

By 2020, 80  per cent of of BC’s natural gas could be created by fracking shale formations. Numerous studies are showing that the fracking of shale leads to many ecological problems and likely results in a higher climate pollution footprint than traditional natural gas wells. It may even be worse than coal.

Robert Howarth of Cornell University sounded the alarm in 2011 with a study that found 3.6 per cent to 7.9 per cent of the methane from shale gas production escapes to the atmosphere in vents and leaks.

The problem is that methane, the main constituent of natural gas, is much stronger in its green house effect than carbon dioxide, especially in the short term. According to Howarth, warming from shale gas is at least 20 per cent greater than coal in the first twenty years after release and it may be twice as great. Over the 100 year time frame, it is comparable to coal.

Howarth’s study opened a field of controversy. Critics point to the limits of the data he used – apparently, the gas industry refused to provide any more. A more recent study by Nathan Hultman of the University of Maryland found shale gas to have only 56 per cent of the climate impacts of coal when used electricity generation.

Still, the bulk of the research is against shale gas. Leakage rates may be site specific, and a recent study by the US National Oceanic and Atmospheric Administration (NOAA) confirmed Howarth’s numbers in other locations. The most positive conclusion is that shale gas won’t save the world but that if well managed/regulated, it might be marginally better than coal and oil.

This seems a flimsy foundation for investment. In the words of Joe Romm of Climate Progress:

[I]t bears repeating we have only a short time frame to sharply reduce GHGs before it becomes all but impossible to avoid key thresholds and tipping points.... And that means we can’t afford to spend lots of money on something that is “marginally better” than what we are doing today.

Romm and others suggest that shale gas emissions require systematic study before governments pursue policies in support of infrastructure that could accelerate climate related dangers. The Canadian Centre for Policy Alternatives thinks the burden of proof should be with industry and the BC government to substantiate the claim that shale gas can serve as a bridge fuel to a low carbon economy.

Similarly, the province’s claim that BC exports of natural gas in liquid form (known as LNG) will diminish Asia’s reliance on dirty energy sources needs substantiation. Mark Jaccard, professor in resource and environmental management at Simon Fraser University, wrote in an email to the Globe and Mail:

“I work with the leading global energy modellers and none of them find this result. [Clark] has no evidence to the contrary and yet makes up this story that natural gas exports are somehow miraculously clean.”

Mark Lee of the Canadian Centre for Policy Alternatives stated in a Carbon Talks presentation that natural gas exports to Japan will create an emissions spike because it will replace nuclear power. The International Energy Agency’s forecasts for China show a growing use of coal and natural gas will just be piled on.