The all-you-can-eat-buffet of planet earth 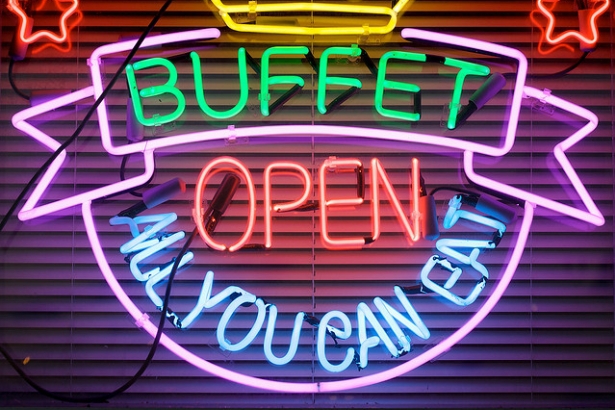 Last Thursday night, Professor Bill Rees of ecological footprint fame spoke at the SFU series ‘7 Billion and You’. His wide-ranging talk covered climate change, resource use, cultural narratives, consumption, growth models, economic models and sustainability (yes, he went overtime) but the title of his talk was ‘Resources and the 7 Billion’.

He spoke about humans being ‘k-strategists’ in the way that we will expand to fill as much habitable land as possible while pushing right up against the limits of the carrying capacity of the ecosystems in which we live.

Naturally, saying humanity’s rapacious hunger for everything in sight means we will expand to fill all the space and take everything we can without much thought for the consequences can rub people the wrong way (hey! I have self restraint! I’m not like that!), but Professor Rees had a wealth of data to back this claim up.

In terms of filling every habitable space of land possible on the planet, well humanity has done a really excellent job of that already – that’s why there are 7 billion people on the planet and counting, with the UN estimating there could be 9 billion by 2050. Each person on the planet has an ecological footprint – an amount of functioning arable land that is required to support the person depending on their lifestyle. My footprint is much larger than someone who doesn’t have a thing for international travel, but probably smaller than someone who travels overseas while also having a large house, large car and long commute.

This concept is what organisations like the WWF are referring to when they talk about ‘one planet living’, because we would currently need four extra planets to sustainably house the world to the living standards of North America. And something I keep forgetting when they talk about the extra planets we would need is that we would need them to be empty of people. We need four extra functioning planets that don’t have humans so that we could mine them, deforest them and use them to support our lifestyles here. We are living on our planet’s ecological credit line right now, and it looks like the bill is coming due this century.

For those of us who scoffed at the lecture at the idea that we couldn’t restrain ourselves (well, I pay my credit card off each month!) Professor Rees asked the room who had ever been to an ‘all-you-can-eat’ buffet. He then asked the room who had eaten too much at the buffet and felt sick afterwards and many people (including myself – all you can eat sushi is just so good) raised their hands. This is the psychological crutch that has put humanity on our current course to climate catastrophe. For as long as anyone has been able to, we’ve been using the planet and its resources as our own all you can eat buffet and we’ve never seen a good enough reason to stop.

This has built a really strong cultural narrative around constant growth. If it’s not getting bigger and better and being supersized, then you’re being ripped off. Your house gets bigger because you needed a bigger lounge room to fit your larger TV that you bought because your paycheck just got a bit bigger too. Obviously this doesn’t apply to everyone – there are variations within all populations – however the overwhelming cultural narrative is one that constantly encourages more of everything in order to keep functioning and it’s putting increasing strain on our planetary systems.

The problem with these narratives is that they all assume smooth and steady change. Nothing non-linear and unpredictable can be included into this narrative because it’s unpredictable. However, unpredictable is exactly what our atmosphere is going to become through climate change.

Taking carbon out of the ground and burning it is increasing the concentration of CO2 in our atmosphere and supercharging the extremes at the end of the bell curves, giving our planet the highest average temperatures experienced in the last 4,000 years. 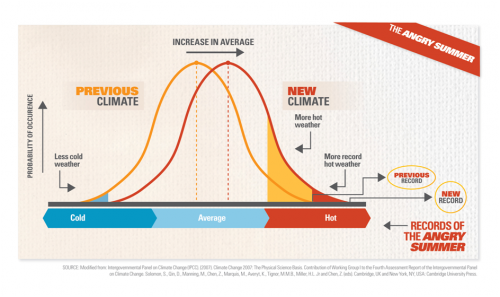 So the humanity-preserving question then becomes how do we change from the course we’re currently on, where we will do almost anything to get at and extract all the fossil fuels we can; regardless of how dirty the bitumen is, how hard the gas is to frack, or how fragile the drilling area ecosystem is?

The way we change course is to change our cultural narratives, because the societies that survive are the ones who’s myths and stories line up with the biophysical realities of the planet. Professor Rees suggests that we need to start talking about steady states, recognising that this period of rampant growth and change that we’ve been living in for the past few centuries is completely anomalous in planetary history.

We need to start living within our means and stop believing in the myth of human exceptionalism where we think we can decouple ourselves from the ecosystems within which we live.

We need to recognise planetary capacity and limitations and put systems in place where people are not allowed to treat the planet like an endless all you can eat buffet and the atmosphere like a free waste dump.

We need to start changing the way we tell the story, because the stories we tell about ourselves are what will allow us to continue to survive as a species on this planet.