Adventure in the melting Arctic: Vancouver-based team to row the Northwest Passage 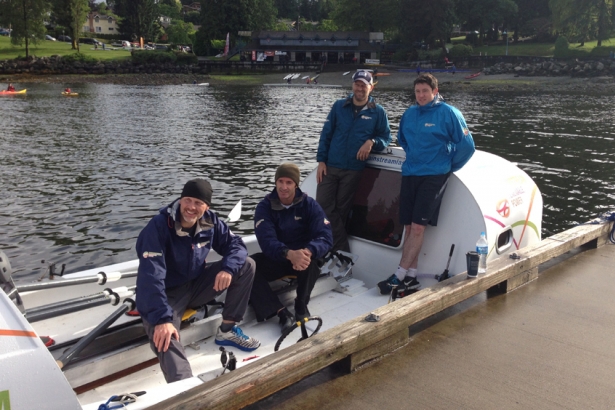 No one has ever attempted to row the Northwest Passage in one season before, because no one could. It has always been blocked by summer sea ice. But the radical warming of the Arctic has changed that. This summer four adventurers hope to draw attention to the profound changes of the Canadian north by rowing the heart of the Northwest Passage, from the Inuvik on the Pacific Ocean to Pond Inlet on the Atlantic. The 3,000 km journey will take 70 to 80 days if all goes well. They have about a 90 day window until ice returns to the shallow waters at the northern edge of North America.

MainStream Renewable Power is sponsoring the seasoned adventurers. Kevin Vallely set a South Pole speed record. Paul Gleeson rowed the Atlantic. Frank Wolf biked, paddled and walked the route of the Enbridge pipeline. Denis Barnett is new to major expeditions, but this is the exact kind of world class opportunity that he’s been seeking for years.

Vallely takes satisfaction in the fit between the rowing expedition and the issue they hope to publicize. “There’s something beautiful about the way we can talk to climate change directly by the actions we’re doing. Very few expeditions can do that,” he said.

He described the publicity launch of the “Last First” at a summit on the Arctic sponsored by the Economist Magazine. The summit’s scientific panel noted that the rapid melting of Arctic ice has surprised and shocked the scientific community. Last years’ low ice conditions weren’t predicted for another thirty years. Three of the panelists said the Arctic would be ice free in summer within ten to 20 years. One panelist said it would occur in the next three years. 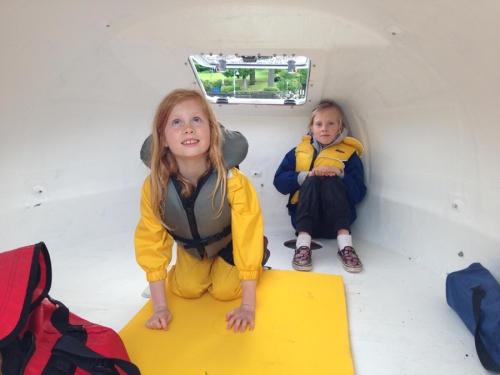 Arianna and Caitlin Vallely in the aft cabin where two men will sleep while not rowing. The forward cabin will hold supplies.

An ice free Arctic also provides access to more fossil fuels: according to the U.S. Geological Survey, the Arctic contains about 13% of the world’s undiscovered oil, 30 percent of its undiscovered natural gas and 20 percent of its undiscovered natural gas liquids. John Higginbotham at Canada’s Centre for International Governance is calling for investment in icebreakers, deepwater ports, oil spill remediation facilities and other infrastructure along the Northwest Passage.

Vallely expects the adventure will provide “Iliyra” – an Inuit word that means awe combined with fear. “Like when you see a polar bear, and there is nothing between you,” Vallely explained.