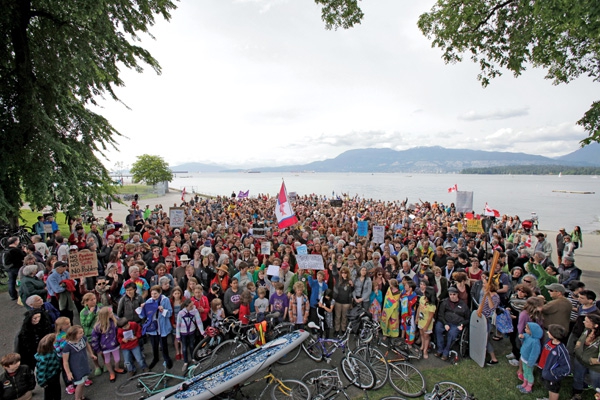 Over 500 persons of all ages and types attended the photo shoot for an ad that will urge Premier Clark to protect the BC coast.

Voters Taking Action on Climate Change, known for creative campaigning, has purchased full page ads in the Vancouver Sun and the Province. The ads will feature a photo shot on at Kits Beach last weekend. It will be directed to Premier Christy Clark and ask her to oppose pipelines through BC and tankers along the coast.

In recent years, multinational oil corporations have pushed a new energy strategy in Canada. In the words of economist Robyn Allen, former CEO of ICBC, “Their strategy could turn BC into an oil tanker terminal for Alberta and crowd out viable activity in tourism and commercial fishing.”

Premier Clark has declined to take a position on the Enbridge pipeline until the Joint Review Panel concludes its hearings. Allen noted in an open letter that there has been no meaningful review of the pipeline proposal by the ministries of the BC government and that the province will not conduct its own environmental assessment of the project. This lack of engagement, she said, leaves BC’s interests without protection.

Nonetheless, Premier Clark’s support appears to lie with fossil fuel industries. In December, 2011, she astonished BC voters by stating that "British Columbia's coast does not just belong to British Columbia. It belongs to Alberta, Saskatchewan, Manitoba, Quebec, Ontario and the Atlantic provinces and it's essential that our ports and our infrastructure all across the west are functioning as well as they possibly can, because that's what allows trade to flow outside our country and that's what puts people to work."

More recently, Premier Clark characterized federal NDP leader Thomas Mulcair’s warning against the currency impacts of oil exports on the economy as a whole as “goofy.” Economists think that the rise of the Canadian value due to oil exports is making other sectors of the economy less competitive in the export market. Even the oil sector is being hollowed out because plans to refine the bitumen in Canada have been scrapped in favour of exporting the raw resource.

For climate stability advocates, preventing tankers and pipelines also prevents  much larger consequences. In a New York Times Op Ed piece published in early May, leading climate scientist James Hansen reiterated that if the oil sands are developed as planned, it would be “game over” for the climate, and the conditions that favour life on Earth. In the words of author and activist Bill McKibben, , “Along with protecting this most beautiful coastline, and along with protecting all the people and other creatures that have been here for so long, [BC residents] also have the great honour and the great burden of having to help protect the rest of the planet. What they want is for British Columbia to be a kind of carbon portal....and we just can’t let that happen. That oil has got to stay in the ground.”

Despite the high stakes, Voters for Climate Change keeps a playful tone to many of its efforts.

For example, prior to the photo shoot if you googled “Enbridge,” the ad at the top of the page read: