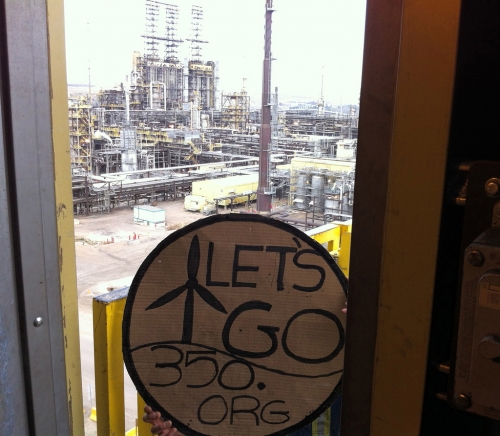 Photo by Anonymous | Courtesy of 350.org

I am an Oil Sands worker and risked my job to take this picture. Myself, along with the majority of my co-workers are ready for a renewable energy revolution. We need to stand together to eliminate the corruption that exists in this industry, start taxing carbon emissions, and creating green jobs for a sustainable future. We do not work in this industry because we like supporting large oil companies; we simply have no other choice. We want jobs that provide long term economic, social and environmental sustainability for ourselves, our country and our planet.

**** This is posted as anonymous. If my identity is revealed I could be permanently banned from all sites for life.

In hope and action,

The above image and description recently appeared on climate action group 350.org's Flickr account and website. Taking the photo at an oil sands facility in Fort McMurray, Alberta, the unnamed photographer claims to be risking his or her career by expressing such an anti-industry perspective.

Despite the presumed courage involved in publishing such a picture, the comments left by users on Flickr demonstrate a mix of support and skepticism about the photographer's views. While many applaud the worker's bravery and thank him or her for a "message of hope inside the beast", others question the claim that employees work in the oil sands because they "have no choice".

"Quit and get a clean job. Install insulation," advised one user.

"You compromised for money, just like the corporations you are talking about," said another.

Meanwhile, others like sustainability writer James Glave say the weight of transforming an entire economy should not fall on one worker's shoulders.

On one hand, it's interesting to see that oil sands workers are acknowledging corruption in the sector and pushing for the development of cleaner, renewable alternatives. But at the same time, there are former employees who say they've successfully left the industry to pursue careers in wind or solar energy. Change is possible, it seems, for those motivated enough to go after it.

So what do you think? Do environmentally-conscious Canadians working in the oil sands have a choice? Tell us in the comments section below.