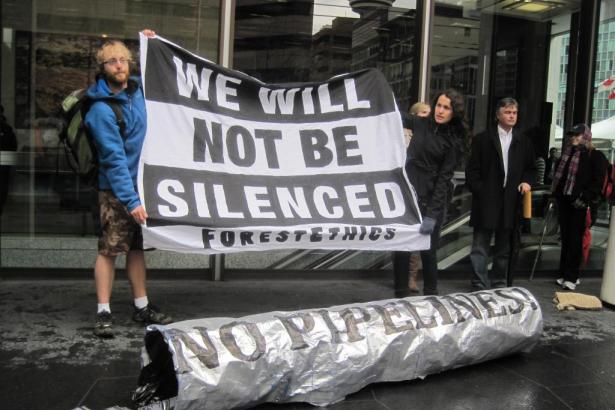 After announcing the creation of a new, non-charitable organization formed to speak out against the Harper government's environmental offenses, Canadian environmental group ForestEthics Advocacy is putting out a passionate call to citizens to join in the fight.

Leaders at ForestEthics decided this week to split the respected organization into two, leaving one (ForestEthics Solutions) as a registered charity and establishing the other as an advocacy group with the freedom to conduct activities the government may deem as overly "political". Ontario lawyer Clayton Ruby has taken up the challenge of heading up the advocacy side of the operation.

These decisions come as a direct response to ongoing threats from the Conservatives regarding environmental groups' charitable status, as well as to the government's "gutting" of key environmental protections.

It seems the organization has not missed a beat since their announcement on Tuesday, with a forceful letter going out today to thousands ForestEthics supporters.

Read the letter below:

If Harper wants a fight, bring it on.

Drilling, fracking, mining. Natural Resources Minister Joe Oliver has been very clear: unless you live near or work on controversial energy projects you have no business telling the government what you think.

As proud citizens of a democratic nation we must fight these efforts to undermine free speech, we will fight attacks on our environment, and WE WILL WIN.

Join the thousands of Canadians who have stood up and said “We Will Not Be Silenced”!

The Harper government is relentless. They have tried to legislate, intimidate and denigrate us into silence. They have sold our public lands to the highest bidder and run straight to the bank with their taxpayer subsidized profits.

They have also grossly underestimated our power to speak out and fight back. Now is the time for more advocacy, not less; more action, not less; and more outcry, not less.

Don’t let Harper and Big Oil get away with these outrageous acts. Together we can create a world that’s safe for you, me, our children and our wildlands.

To learn more about ForestEthics Advocacy and their new donation program, click here.