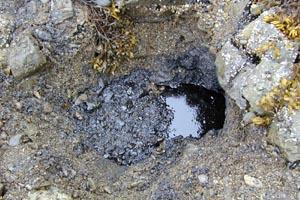 Marine oil spills cannot be entirely cleaned up; oil persists in the substrate of the most biological active intertidal zones.

Just over 23 years ago, the Exxon Valdez ran aground. As BC contemplates a proposal that would end the 40-year moratorium on tanker traffic on the coast, the facts of the Exxon Valdez provide helpful contrast to the promises of Enbridge and its Northern Gateway oilsands pipeline.

What have we learned from experience?

We’ve learned that marine oil spills cannot be entirely cleaned up; that oil persists in the most biological active intertidal zones; that Enbridge’s estimates for the spread of bitumen contamination from a tanker spill are outside of the ball park of what happened in Prince William Sound; that Enbridge far exceeded its insurance coverage in the Kalamazoo bitumen spill and has not cleaned that area to its former condition; that the Exxon Valdez created suffering for which money provides no cure; and that ecosystems in Prince William Sound have not fully recovered 23 years after the Exxon Valdez oil spill.

Enbridge hugely underestimates the area potentially affected by an oil spill
An Enbridge study calculates that a spill of 36,000 cubic metres of bitumen would contaminate 240 kilometres of shoreline in 15 days. It could take four years for exposed rocky shores to recover, up to 12 years for sheltered shores.

Compared to the actual consequences of the Exxon Valdez spill, Enbridge’s estimates of possible shoreline contamination are extremely optimistic.

Enbridge estimates that a spill would contaminate 240 kilometers of shoreline while the Exxon Valdez itself, a spill only 25 per cent larger than the Enbridge estimate, contaminated over four times that amount of shoreline. In addition there’s no reason to assume that a supertanker bitumen spill would be smaller than the Exxon Valdez spill: the proposed supertankers carry almost eight times that amount.

Enbridge’s fanciful estimates don’t seem to account for the greatly increased difficultly in cleaning up bitumen rather than oil. Under normal circumstances, an oil spill clean-up typically captures only 10 to 15 per cent of the oil from a marine spill. Chemically diluted bitumen is both heavier and more toxic than Valdez oil, and harder to clean up. Reports of Enbridge’s clean up efforts after a pipeline broke near the Kalamazoo River state that, because bitumen sinks instead of floating like oil, skimmers and booms could not capture it.

Instead, bitumen entered the river sediments. It now covers about 200 acres of river bottom.  Enbridge dumped sand so that clear waters run over an apparently clean river bed. But the oil remains just below the surface, as shown in a video with footage by a former Enbridge worker. In addition, volatile portions of the condensate contain toxic fumes like benzene and toluene. Residents near the Kalamazoo River fell ill from the fumes; some had seizures. Those fumes could kill marine wildlife.