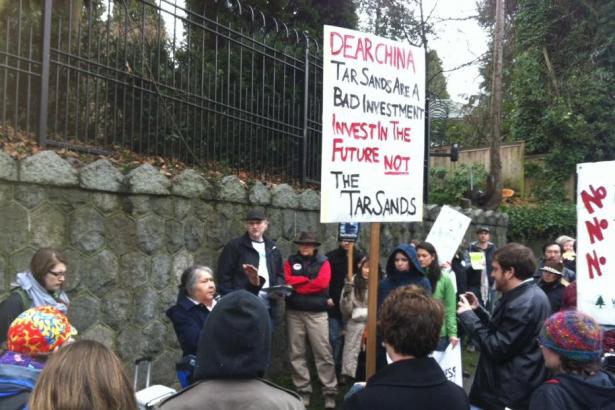 A group of over 50 protesters gathered outside the Chinese consulate on Granville Street this afternoon, voicing their concerns over foreign investment in Canadian oilsands projects -- a key topic during Prime Minister Stephen Harper's visit to China this week. Harper is currently traveling in China with Enbridge CEO Patrick Daniel.

The demonstration was organized by environmental advocates at the Wilderness Committee but was also attended by protesters from other local groups, including environmental justice committee members from Occupy Vancouver.

"If we're ever going to get serious about sustainability, we have to talk seriously about our relationship with China," said Wilderness Committee campaigner Ben West.

"We're here because we want to make sure that the people of China, the government of China and the people of the world know that Stephen Harper isn't there talking on our behalf right now."

First Nations representatives at the demonstration addressed the threats posed by oil projects like the proposed Northern Gateway pipeline, before leading the group in traditional songs.

Facilitating oil and energy exports is one of the key topics being addressed by Harper and his delegation in China, and the Northern Gateway project is currently considered top priority in terms of opening up trade routes to Asia.