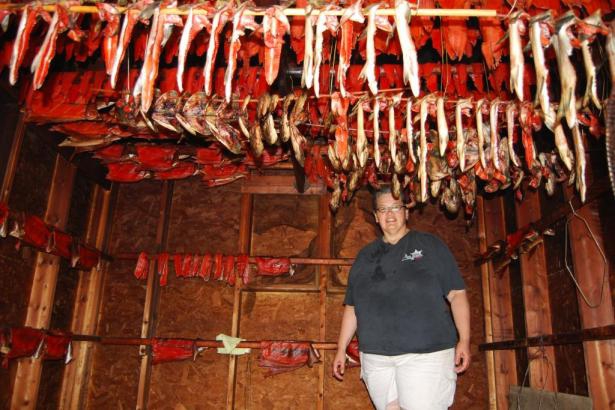 The ongoing controversy over the Enbridge oil pipeline and the testimony of First Nations before the Joint Review panel has brought into focus the connection of First Nations people to their land. Through listening to JRP testimony and having conversations with First Nations Chiefs and members, I observed a strong cultural fusion between food, territory, spiritual practice and governance. This article compiles some observations on how First Nations have managed to eat locally since time immemorial.

They identify with the places from which food comes.

Richard Sam of the Wet’suwet’en explained to the Enbridge Joint Review Panel in Smithers, “That river is only a river to you people. It is our life blood to us…. We depend on that river for our existence.” Hereditary Chief Alfonse Gagnon said, “That river is who we are. It has always been who we are.”

In conversation, Trevor Russ, an elected council member of the Haida Nation, said, “We’ve eaten seafood since the beginning of time. For us, it’s part of who we are. We come from the ocean. Every First Nation you speak to along the proposed pipeline right through to Haida Gwaii has a story of how they come from that land or that part of the sea.”

Yvonne Lattie, a Gitxsan Hereditary Chief, said, “I don’t think Enbridge has any understanding of our connection to the land. It runs through your blood. The blood that runs through the veins is the rivers that run through Mother Earth. Without life giving water, there will be nothing.”

They honour that which is permanent – Gwalxyeinsw.

The life experience I’ve heard described by First Nation leaders and elders portrays a fusion of story, food, land, law, culture and identity. Larry Patsey, hereditary chief of the Gitxsan First Nation, referred to this when asked about the significance of intergenerational legacy, with a Gitxsan word. Because the word originates in an oral tradition, he sounded out the letters to write it down: gwalxyeinsw.

“Gwalxyeinsw means something that progresses through time, in the future from the past and through our lives today,” he said. “It’s hard to explain in English. It’s the recognition that through time culture will always be present to each of those, the past, present or the future. It will never change.”

Food and governance are fused.

In A Death Feast in Dimlahamid, Terry Glavin writes

For the Gitksan and Wet’suwet’en, the feast house is the credit union, the House of Commons, the land titles office and the community centre. Disputes are arbitrated, debts are settled, friendships renewed and community stability is reinforced. Each feast is a minor economic engine that disburses goods throughout society, and each transaction is recorded and acknowledged.

The feast hall, as the place where laws are made and business, reveals the centrality of food to governance. Wet’suwet’en testimony to the JRP spoke to a deep concern that, without healthy territories, feast hall obligations would become more difficult to meet. When territories, through good stewardship, are able to produce a lot of food, giving away the abundance creates high status for the hereditary chiefs responsible for that area. This strengthens the governance system. Without healthy territory to provide food, the governance system weakens. According to Glavin, “This is what the anthropologists describe as an economic system based on balanced reciprocity in which perishable wealth is converted into non-perishable status.”

Wet’suwet’en Hereditary Chief Darlene Glaim testified before the JRP, “We’ve been here since time immemorial. We come from a rich territory. We trade things with one another in the feast hall. We trade our berries, fish and moose meat. Whenever we hold a feast, what happens at the feast becomes law.”