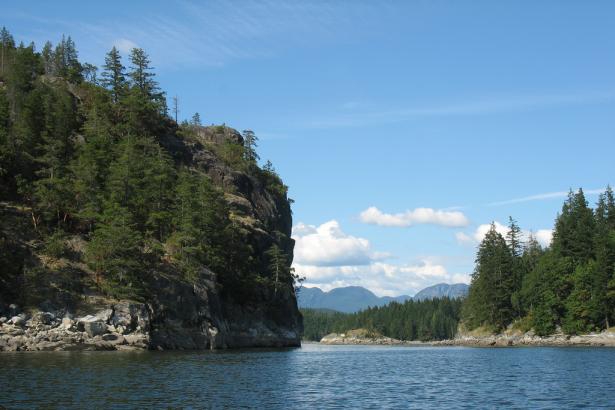 Forests along the shore on Cortes Island. Photo by Gerry Thomasen.

Impending logging on BC’s pristine Cortes Island is becoming a hot topic this week, with increasing media attention around the issue and a petition to protect the forests now boasting over 4,700 signatures.

Plans for logging were announced in December by Island Timberlands, a subsidiary of Brookfield Asset Management that owns large and valuable parcels of land across Cortes.

Carrie Saxifrage, the Vancouver Observer’s sustainability blogger and one of the creators of the petition, has been a member of the Cortes Island community for 17 years. After her insightful Observer piece summarizing the ongoing logging issue – which has now become the main “go-to” reference on the situation – Saxifrage was interviewed this morning by radio host Gregor Craigie on CBC’s On the Island.

“I don’t know how CBC picked it up,” she said after her live appearance on the local island morning show.

Interest in the Cortes issue has spiked in recent weeks, and now even mainstream Vancouver publications like The Province have run stories about opposition to the logging operations.

Although the small coastal island only has about 1,000 year-round residents, the petition to Island Timberlands has drawn support from across BC and beyond. Celebrated writer Margaret Atwood and actress Mia Farrow both showed support by retweeting links to the online petition, spreading the word about Cortes’ endangered forests to hundreds of thousands of followers.

For Saxifrage, the CBC radio feature was another way to help get the word out. But a short interview often isn’t enough to truly get the point across.

“There were a lot of points I wasn’t able to make, the big one being that Cortes is representative of the global problem that people are becoming aware of,” she said.

That “global problem” is the same one that’s at the root of the Occupy Wall Street protests – that the 99 per cent in society are held hostage by corporate greed and by the interests of the wealthiest one per cent. Just as the Occupy movement challenges the power held by the rich, Saxifrage says the residents of Cortes are challenging profit-driven strategies that would irresponsibly exploit Cortes Island’s precious resources.

Those resisting logging on the island have now connected with Occupy Wall Street supporters in New York City, many of whom have visited Cortes.

“The thing that makes it almost poetic is that Zuccotti Park is owned by Brookfield Asset Management, too,” Saxifrage said, referring to the downtown Manhattan space originally taken over by Occupy protesters.

According to Saxifrage, concerned residents on Cortes Island have put countless hours and immeasurable volunteer efforts into protecting their forests. In addition to painstakingly documenting the island's many rare and endangered wildlife species, locals have worked with First Nations and other private and corporate landowners to come up with sustainable and economically beneficial ways to maintain the land.

“The community has been trying to work with the corporate owner for decades,” she said, noting Island Timberlands' poor record when it comes to community consultation.

Now, with logging set to begin within weeks, residents and activists on the island are preparing for battle. Supporters say the main resistance group on the island, Wildstands, has been training and preparing for over a year to stand up for their forests.

“They’re really going about this deliberately and consciously, and they’re doing an amazing job. They are so prepared, on so many levels,” said Saxifrage.

The goal of the Cortes Island petition is not to stop logging altogether; instead it aims to reduce long term impacts by urging Island Timberlands to retain old growth areas, protect watersheds and salmonid habitats, respect the BC Sensitive Ecosystem Inventory and ban clearcut logging methods.

“The structural problem is that they’re talking about [logging] 20 to 30,000 cubic metres this year, and it’s just not sustainable,” said Saxifrage. “Those jobs aren’t going to be long term jobs, and the logs are likely to be exported.”

Despite the opposition to current logging operations, Saxifrage acknowledges that many on the island depend on forestry jobs for a living. As a result, residents and other industry workers are also concerned about the drastic increases in raw logs being exported, particularly to places like China. When logs are exported before processing, it means other mill and other industry jobs are exported with them.

“This model of logging doesn’t make sense. There’s just not enough benefit to BC, and there’s so much harm to BC. And really it’s time for the province to step in and represent the interests of the people of BC,” she said.

Along with starting the petition, Saxifrage has also written letters appealing to Premier Christy Clark and to Steve Thomson, BC’s Minister of Forests, Lands and Natural Resources. So far, she says she has received a form letter in response from Thompson, but has yet to receive anything from Clark.