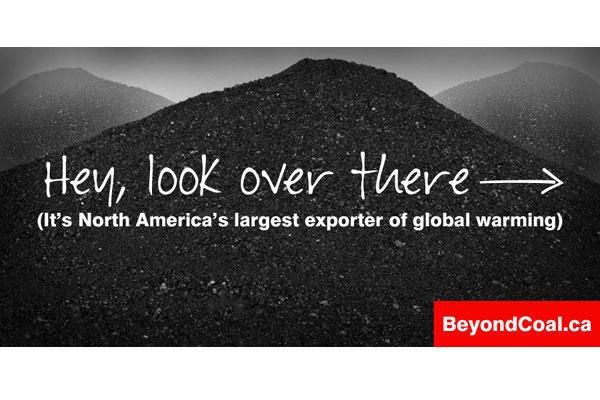 When you own the billboard company, you choose what message it broadcasts.

Drivers on the road to the Tsawwassen ferry terminal will see two different commercial enterprises owned and controlled by Jimmy Pattison: the billboards that line the road, and Westshore terminal.

Westshore, visible to the north, loads more than 700 train cars of coal per day into the biggest coal ships on the planet. Westshore Terminal easily surpasses the combined coal shipments of all other terminals in Canada.

Beyond Coal bought billboard space on one of Jimmy Pattison’s billboards, hoping to point out the terminal that ships B.C. coal’s massive contribution to climate change. The proposed billboard showed a photo of a mountain of coal, an arrow pointing toward Westshore Terminal and the tagline: “North America’s largest exporter of global warming.”

But Jim Pattison did not allow it.

Beyond Coal was permitted to post a watered-down billboard with no reference to the adjacent terminal. It asks: “Can BC be a climate leader and still export 40 million tonnes of coal per year?” 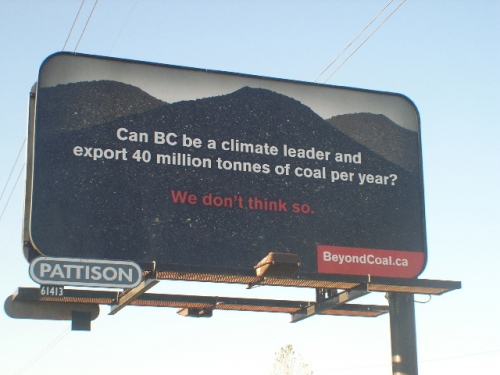 Today at noon, Beyond Coal unfurled the billboard as it was originally designed, with an arrow pointing up to Jimmy Pattison’s office at 1067 W. Cordova. Kevin Washbrook, Director of Voters Taking Action on Climate Change, opened a suitcase of coal gathered from the rail beds and used it to draw a picture of Jimmy Pattison’s carbon footprint on the sidewalk. 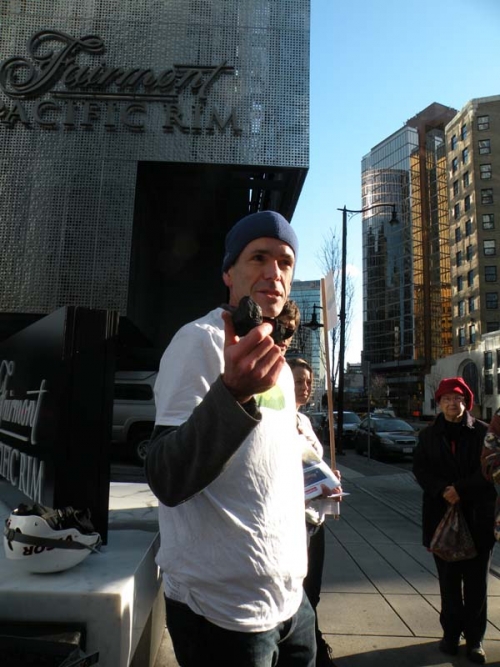 Washbrook noted that the International Energy Agency recently stated that the world has five years in which to begin the transformation of its infrastructure before runaway climate change gets locked in. “Are you going to enjoy the ride off the cliff?” he asked the 40 citizens who gathered in a patch of sunlight, “or are you going to try to take the wheel and turn us toward a better future?”

Washbrook pointed out that Premier Christy Clark has just completed a tour of Asia, drumming up business for BC resource exporters. “If the IEA is right,” he said, “what Clark is doing is wrong.”

Washbrook suggested that, because Pattison is close to “legacy time,” he might want to shape that legacy. Instead of being remembered as a destructive coal baron, Washbrook invited Pattison to “be the person who stops the car from driving off the cliff.”