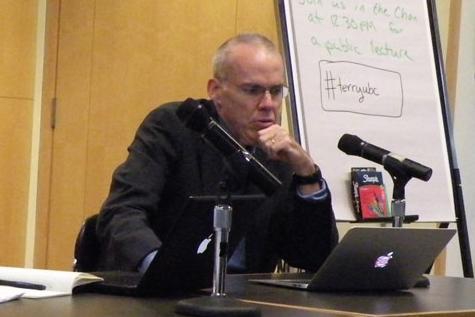 "Last year, Exxon made the most money in the history of money. Corporations can't be allowed to run everything and rig every contest. They need to be subordinate to the other needs of society."   Photo by Carrie Saxifrage.

Bill McKibben is the foremost climate change activist and author. He founded 350.org and was a key organizer of the civil disobedience at the White House in which over 1,200 people were willingly arrested in order to bring publicity to the impeding decision regarding the Keystone Pipeline. That pipeline would bring the tar sands across the US prairies to Texas refineries.

After U.S. President Barack Obama delayed that decision, McKibben headed out on a victory lap, using the momentum of the decision and the Occupy movement to underscore the tragic impact that a few oil companies are making on the planet as a whole, and B.C.'s crucial role in stopping them.

I heard McKibben speak in two venues: at Occupy Vancouver and for a group of students and professors at the UBC Terry Project. At Occupy Vancouver, hairy occupiers patiently presented resolutions regarding media, housekeeping and legal committees to a bundled up crowd who responded with their hands. At the Terry question-and-answer session, groomed UBC students received questions for McKibben only by tweets. Both audiences were dominated by 20 somethings who are grappling with the Earth they will inherit. The content of the two talks largely overlapped, and the following is an abbreviated paraphrase of them both.

The different look of the two audiences underscored McKibben's point that we all have different skills to bring to what truly is the effort to save the planet. As he put it, celebrities bring their dashing good looks, activists bring organizing skills, academics bring their credibility, artists bring the ability to reach hearts and minds that don't respond to charts and numbers, and alternative news sources bring an increasingly credible source of information as the mainstream media loses credibility by skewing itself into alignment with the big money. Everyone brings something to the crucial efforts now underway, he told both audiences, provided that we show up.

What was it like to learn about the State Department’s decision to delay a decision on the Keystone Pipeline?

The victory was particularly sweet because TransCanada was 100 per cent certain of victory. It had mowed the 1,700 miles of the pipeline route and left mountains of steel pipe in fields across the U.S. prairies that are now going to rust.

But there are no final victories in environmental struggles and this one might be incredibly temporary. If Mitt Romney won and the Koch brothers told him to frack Old Faithful, he would quickly do it.

We’re learning the tactics and approaches that remind people that, if these pipelines to go forward, we are party to massive climate change that hurts not only ourselves but vulnerable people all over the world.  We’re learning to use our bodies as the ante to get into the game and then to fight like hell.

The Keystone pipe line decision puts a lot more pressure on B.C. because the oil companies are going to want to move the oil through the Enbridge pipeline to Kitimat or by expanding the Kinder Morgan pipeline that goes into the Burrard Inlet and fills the tankers that sit in English Bay.

If all these plans go forward, BC will be the jumping off point for a large portion of the world’s CO2. LEED certified buildings on the UBC campus are going to become like a sick joke in the greater context of climate damage coming out of B.C. Jim Hansen, the world’s leading climate scientist, says that if all the oil in Alberta could be burned over night, the world would increase in temperature by 11 degrees and we wouldn’t ever be able to get the climate system under control. There can be no starker, clearer warning. You would think that any policy maker would say, “let’s find something else to do, that is clearly not a good idea.”

We’re counting on Canada to live up to its heritage of solving, not causing, the world’s most serious problems. Canada is an educated, literate society with lots of opportunities to figure out other ways to make money. It’s a shame to let oil corrupt its politics over time. The Canadian government now operates as a subsidiary of the oil industry.

What should academics do? Academics are speaking truth to power but governments aren’t listening. Yet activism and academia make an uneasy fit.