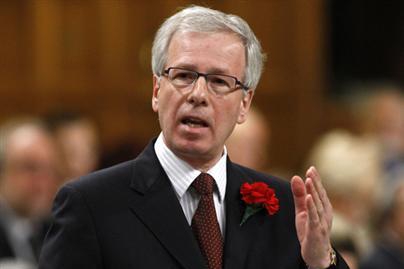 Stéphane Dion, MP and former leader of the Liberal Party, would like to see the headline above published everywhere. It reflects a finding buried on page 38 of the National Round Table on the Environment and the Economy (NRTEE) report “Paying the Price.” “This headline would accurately represent the way things are headed right now,” Dion told an audience of SFU Public Policy students at a Carbon Talks presentation, “If this were the headline, it would stay in the minds of everyone. Instead, papers report that climate change impacts will reduce the Canadian GDP by $5 billion in 2020. This doesn’t mean very much to people.”

Dion set the stage for his advocacy of a global carbon tax with some items he found buried in the news: a new International Energy Agency study that states dangerous climate change (an increase of over 2 degrees) will be “locked in” if humans don’t act within five years and that business as usual will result in an 11 degree warming; and a recent report that global emissions increased by a record 6 per cent in 2010.

Dion first spoke of the upcoming UN Climate Conference in Durban, South Africa from November 28 to December 9. He told the audience that many critics would like the UN process to completely fail, so new efforts can take its place. He doesn't share this view, in part because he has been deeply engaged in the COP (Conference of the Parties to the UN Framework Convention on Climate Change) talks ever since he chaired the highly successful Montreal COP in 2005. He agrees that COP is unlikely to surmount the different interests of the developing and developed nations. But, if there are no big clashes in Durban, COP can facilitate progress in small, technical areas, as it did in Cancun. A complete failure of COP would weaken existing carbon markets as well as leaders who are  making progress in their own countries.

But Dion doesn’t think COP can accomplish the most important goal: agreement on greenhouse gas emission reduction targets. “No one will accept a hard cap because it seems it will stop the 6-10 per cent rate of growth in developing countries,” he said. Dion would like to see a process parallel to COP implement a global harmonized price on carbon. Scientists would set the price at the level necessary to keep climate change under two degrees. Two degrees is the temperature at which scientists believe natural systems like the Arctic tundra would be irreversibly converted from carbon sinks to massive carbon emitters and create run away heating of the planet.

Dion sees a global harmonized price on carbon as the best and perhaps only tool that can reach the necessary reductions because it would resolve the impasse over fairness. All competitors would be equally subject to it; it would brook no “carbon free loaders.” “The Indian Minister of the Environment said that if any system would be accepted, it would be this one,” he stated.

Governments would choose how to invest the revenues generated by the carbon price. The revenues could support clean technology research and public transit, or be used to offset the higher price of fossil fuel energy for people with low incomes. Developed countries would be required to use some of the revenues to help developing countries with mitigation and adaptation.

Governments could implement the global carbon tax through existing bureaucracies rather than creating new bureaucracies as required by the Western Climate Initiative or the European carbon market. “The world carbon market won’t happen for decades,” Dion said. “We have until 2017 to stabilize the climate at the 2 degree increase.”

One public policy student noted that voters have a visceral reaction to taxes but are willing to accept sectoral regulations and policies put forward in the name of health, jobs and livability. Dion noted that he fully understood this problem: his support for a Canadian carbon tax lead to the defeat of the Liberal Party in 2008. “I don’t do the happy messaging,” he said. “I tell the facts. That is why I will never run for PM again.”

The “happy messaging” point brought the conversation back to the press: voters won’t support the deep changes needed to stabilize the climate unless they clearly understand the catastrophic consequences of inaction, and those consequences are chronically under-reported, particularly in Canada. The Vancouver Sun headline on NRTEE report stated: “Canadian Environment Minister Not Surprised by Climate Change Costs.”  The fifth paragraph of that article quoted Environment Minister Kent as saying that the government is already on top of the situation. Not until paragraph sixteen does the reader learn that Kent has no plan in place to meet Ottawa’s relatively modest greenhouse gas emissions targets.

Such placating coverage builds the impression that things are well in hand instead of on the brink of staggering changes. Dion suggested that the mainstream newspapers’ failure reflect the magnitude of the coming climate impacts deprives leaders of the informed electorate that would support an effective response.