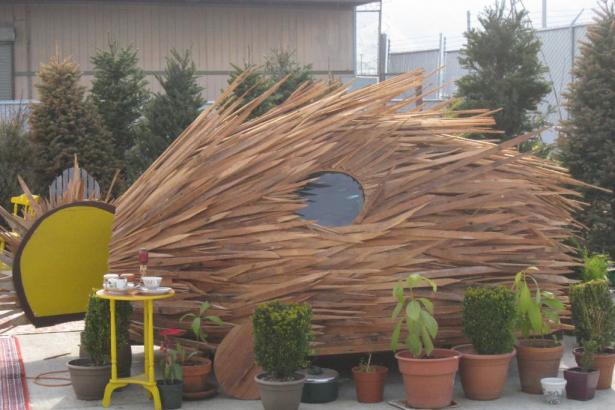 The Art of Garbage: San Francisco Scores 100% In Waste Management

Vancouver lags furthest behind San Francisco in the category of waste management: Vancouver scored 69 compared to San Francisco’s 100. I mentioned this to a friend I was visiting in San Francisco.

“I believe it,” she said. “I just took my son on a field trip to the landfill and it was incredible.” She described how a garbage “docent” welcomed the kids, a term that equates the waste yard to an art museum, where trained docents guide visitors through exhibits. The San Francisco Solid Waste Transfer and Recycling Center in fact has two Artists in Residence who have first dibs on the waste stream, a stipend, and access to a large studio. At the conclusion of their residencies, the artists hold a two day exhibit of their work and then contribute it to the programme’s permanent collection for use in displays that promote recycling and reuse.

After introducing the Artists, the docent put the kids to play in a garbage sorting competition. Fake compost went into a green bin, recyclables went into a blue bin, and true, pure garbage went into a black bin. The docent showed the kids the sorting facility where union employees do their work. The transfer station has a huge, gorgeous garden grown from green compost, which serves as a noise and smell barrier to noise and smell for the neighbours. At the end of the tour, the docent took the kids to the landfill where black garbage, true and pure, gets deposited. It was an experience of such scale and stench that, according to my friend, “it grossed everyone out to the core.”

So far, Vancouver has relied on advocacy measures for its recycling programme, with a result that 55% of its municipal waste gets recycled. But Vancouver plans to move toward mandatory separation of recycling and compostables starting with single family households in 2012 and extending that requirement to multifamily dwellings and businesses by 2015.

San Francisco’s exemplary waste policies began with state legislation in 1989 requiring diversion of 50% of the waste stream away from landfills. San Francisco established its three bin system in 1989 and established higher targets for itself.  Data collection on the waste stream clarified the extent to which compostable materials go to the land fill. After the City made composting mandatory in 2009, the compost haul subsequently increased from 400 tons a day to 600 tons a day.

To minimize landfill, San Francisco also requires: 1) new construction to manage debris and provide adequate recycling and storage space in buildings; 2) use of registered transporters and processing facilities to increase debris recovery from construction and demolition projects; 3) use of recyclable and compostable food ware by food vendors (no Styrofoam); and 4) use of compostable plastic, recyclable paper or reusable checkout bags by super markets and drugstores.

Vancouver plans to research diversion of waste from construction and demolition. It’s first mandatory step will be to disallow clean wood in the landfill by 2015. It doesn’t have authority under the City Charter to prohibit use of plastic bags. Lack of municipal authority may also explain the absence of mandated compostable “to go” food ware.

San Francisco’s waste success was crafted by Recology[ix], its exclusive waste hauler. Recology invested millions in new facilities during the last ten years. It’s operations divert recyclables into 18 different categories for reuse. Determined city staff, including Randy Hayes who went on to found the Rainforest Action Network, upped the ante by pushing for zero waste at the city level. Strong public support was also key: the Mandatory Recycling and Composting Ordinance had 85% support prior to its passage.

Vancouver’s Greenest City Action Plan’s ambitious goals would bring it substantially closer to San Francisco’s waste practices. Reaching those goals will require huge citizen support and participation. The lasting motivation will be residents’ personal desires to “do the right thing” as it was in San Francisco. It’s encouraging to contemplate that, if Vancouver were to copy San Francisco’s practices and match its perfect waste score, it would usurp San Francisco as the “Greenest City” in the US and Canada. After all, a race toward the top is what friendly competition is all about.