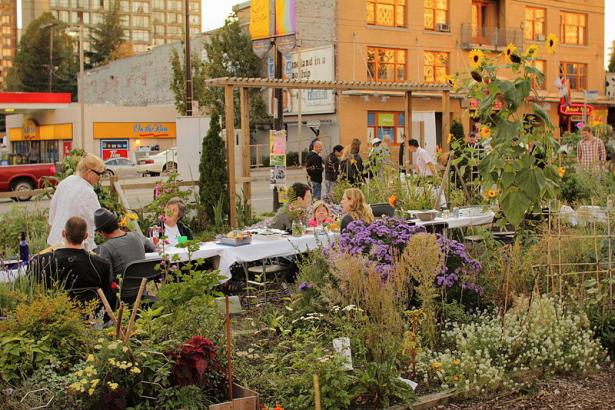 We sat at low table in the back of her modest, standard issue, Councillor’s office at City Hall.

“Ross Moster's characterization of Village Vancouver and the City is a good one: the institution of the City is completely dependant on the individual to make change happen," Reimer said. "At the same time the individual needs the City for basic support. It’s a very dynamic interplay.”

Reimer said it frustrates her when people fail to see the value of basic services. “Cities do certain things well. The tap goes on, sewage goes where it needs to go. These very systems give the community a foundation upon which to innovate.”

Councillor Reimer and the Vision Vancouver slate were elected on the promise of renewal of government itself. “I’m an innovator,” said Reimer. “My generation and younger — we want government to be nimble and responsive to this unpredictable, changing world.”

She believes this is possible while, “continuing our mandate to foster the positive attributes of a stable system.” Reimer cites, as an example, the Open Data Initiative (ODI), for which the City of Vancouver (CoV) recently won the top BC Business Award for Most Innovative Organization in B.C.

Through ODI, CoV staff gathered and organized key data across departments and now offer more and more data free of charge to the public in various file formats.

“The number one call to CoV 311 information has been to ask, ‘when is my trash pick–up day?’” Reimer told me how Recollect.net (formerly Vantrash) utilized the trash schedule on ODI to create a simple app notifying residents of their garbage and compost collection days.

I tested the app and found it to be accurate, quick and slick. Just plug in your postal code and voila, a map and your collection schedule instantly appears. You can also order up email (free), voicemail, text or tweet alerts (for a small fee). Popular support for recollect.net in Vancouver has led to expansion across the Lower Mainland, Victoria and Nanaimo.

“Now, our receptionists use this app from citizens. It takes them two–thirds the time, which saves City dollars. It’s a great example of the way government and citizens can enhance each other’s efforts,” said Reimer.

Reimer describes a further synergy. CoV advertises on recollect.net as part of a campaign to encourage citizens to stop contaminating yard waste and compost with plastic bags (and learn how to prevent pests and odours, while their at it). The problem is huge and potentially will delay Phase two of the Residential Food Scraps Collection Program, by a year, to 2012. 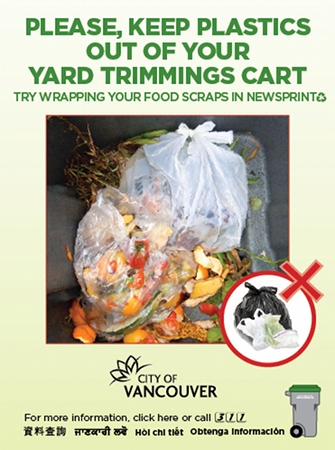 But why should we give up the wrap–it–in–plastic habit?