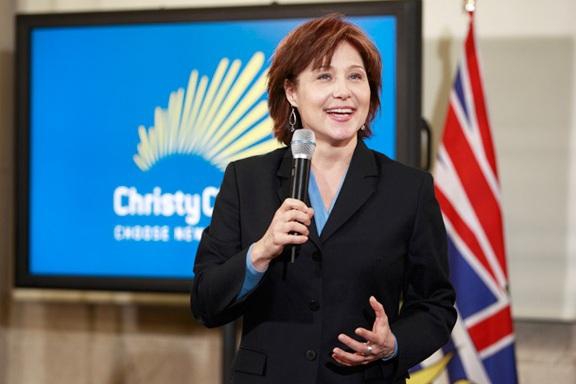 During her campaign, Clark told voters that she supports the Campbell government's climate policies. How will she follow through?

Fifty people gathered in a classroom at SFU Harbourside on March 18 to listen to Dr. Nancy Olewiler, Economics Professor of Director SFU’s Public Policy Program, talk about the future of the B.C. Carbon Tax. The public brown bag lunch dialogue was presented by Carbontalks.

Olewiler described BC’s carbon tax as a “text book policy,” well designed to meet its goals. The tax started at a low level ($10 per tonne) with increases announced well in advance ($30/tonne in 2012) so that businesses can plan for the most cost effective infrastructure investments. The carbon tax covers as many carbon sources as possible, the 77% in BC that come from burning fossil fuels. It’s administratively simple because it relies on the existing tax system, unlike cap and trade which requires a new bureaucratic infrastructure. It’s flexible in that it can be easily raised and lowered. And, most politically important, it is transparent and accountable. All carbon tax revenues must be returned to the people of BC. To assure voters that not a penny more carbon tax is collected than spent, income and corporate tax cuts are fixed by percentage.

A participant said  that the tax cut should be made more visible. The carbon tax appears at the gas pump and on every natural gas bill. Each pay cheques should single out the amount of the carbon tax to remind voters that the revenues are given back.

Another participant, the owner of Zipcars, suggested that the tax cuts could be targeted to changes in behaviour as a way of encouraging low carbon choices. He would also like to see revenues spent on building low carbon infrastructure, such as charging stations for electric cars. Olewiler noted that polls state people would prefer for the revenues go to transit. From her economic policy perspective, it is wise to invest in things that yield services over time because such capital expenditures will keep giving back as the carbon tax revenues decrease.

Olewiler wasn’t sure if the carbon tax has reduced B.C.’s GHGs thus far. There have been too many masking events, such as the volatile price of gasoline and the 2008 recession. But she doubts that the carbon tax will be made into an election issue in the future. This strategy backfired for the NDP in the past and probably helped defeat Kevin Falcon.

Nor does Olewiler expect the tax to rise beyond the 2012 increase to $30/tonne. The current legislation leaves open the question of increases after 2012. A higher carbon tax is necessary to stimulate the shift to a low carbon economy. But it is politically unpalatable until other jurisdictions follow suit because business believe it hurts competitiveness. Olewiler pointed out that evidence from Europe doesn’t provide support for this belief beyond a few sectors. She pointed out that support for a higher tax might increase if the additional revenue were used for public goods such as low carbon infrastructure or health care. The other factor that could push demand for a higher tax would be a demand pushed by information regarding the heating of the extreme North and its consequences, more extreme weather events, and a recovering economy.

Another potential flaw noted by the participants is that while the carbon tax is driving a switch between different fossil fuels it isn’t so far creating the economic incentive to switch to clean renewable energy. For example, the current carbon tax of $20 a tonne adds $1.91 to coal per GJ (unit of energy) but only $0.99 to natural gas. This helps make lower-carbon natural gas cheaper than high carbon coal. But the price of natural gas has been falling faster than the carbon tax has been rising. As a result, natural gas is even cheaper relative to low-carbon sources like BC Hydro.  Right now residential prices for natural gas are about $10/GJ while prices for BC Hydro are over $20/GJ. With BC Hydro set to raise prices another 50% in the next five years, the economics are still shifting away from clean electricity in spite of the carbon tax. The result could be infrastructure investments that rely on cleaner fossil fuel rather than renewables, a strategy likely to fail in the long term.

That’s why Olewiler sees the carbon tax as necessary but not sufficient. Adjunct polices include carbon neutral government, investment in renewable energy, a low carbon transportation strategy and the Western Climate Initiative, a cap and trade system driven by California’s large economy. Olewiler points out the idea of policy tipping points in economic theory. As people put together the whole picture of a low carbon transition, policies will become increasingly integrated and effective.

Meanwhile, the carbon tax could benefit if our new premier hears from its supporters. She writes:

“Now more than ever I also need to hear from you. I want to hear about your priorities and how we can do an even better job for families in all parts of our province. You can submit your suggestions by visiting www.christyclark.ca or emailing me at [email protected].”