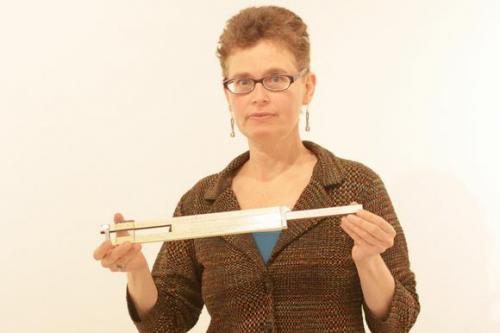 Calculations for the atomic bomb were made with a slide rule. Here, Olivia Fermi holds the slide rule used by her grandfather, Enrico Fermi.

What would you do if your grandfather was Enrico Fermi, one of the greatest physicists of the 20th century and a key architect of the atomic bomb? And your grandmother was Laura Fermi, an environmental pioneer?

For Olivia Fermi, the answer was to set out on a quest, talking to scientists, environmental activists, historians and downwinders: "those who have suffered from the toxic waste stream products of atomic bomb tests, working and living with nuclear facilities."

Now, she is speaking about her experiences on the Neutron Trail.

Fermi has travelled across the globe, a journey that has taken her from Rome to Chicago and to Los Alamos, New Mexico. Each destination she visited represented a significant moment in her family's history and for the legacy of the nuclear age.

She travelled to Rome, where her grandparents lived and where her mother was born.

"My grandmother was Jewish and the anti-Semitic laws in Rome were enacted at the moment my grandfather won the Nobel Prize. They used this as a way to escape," she said.

In Chicago, where Fermi grew up, her grandfather built the first-ever controlled, self-sustaining nuclear chain reaction.

Her journey grew from the purely personal when she began talking to people on the street in Vancouver and in New York City and Boston. "That's when I began to have an inkling that the Neutron Trail would be important to more than myself."

Fermi was surprised how many people have been able to connect to the story of the Neutron Trail.

"I've shown the material to my grandfather's students - they are Nobel Prize winners themselves, to artists, lay people, young people, older people, Europeans, Koreans, Japanese, Americans and Canadians. The response is powerful across all these lines."

She discovered that many of the people she spoke with shared the conflicting emotions, both "pride and shame",  that she felt about our nuclear legacy.

Through her journey, Fermi has been able to reflect on her grandparents and their legacy, both for her and the world of science. Her grandfather passed away before Fermi was born, but her grandmother was a role model for her throughout her childhood.

Now, Fermi thanks her for her perseverance. "She had the courage to speak up about important social issues:  peaceful uses of atomic energy, air pollution control and hand gun control.  And she inspired me."

And perhaps cross-generational dialogue is the key to making more informed decisions about the future.

"We have a choice.  We can use our memories and remembrances to inspire us or to bring us down.  With human-induced climate change cascading, we are at a crossroads in terms of human survival. Our survival probably depends more on our behaviour than on technology."

At her talk last night in Vancouver, Fermi said that many people suggested that she share her material with high school students, a direction she plans to take in the future.

The Neutron Trail is a quest to discover how she and, in turn, all of us can move beyond the conflicts and dilemmas associated with the nuclear age. 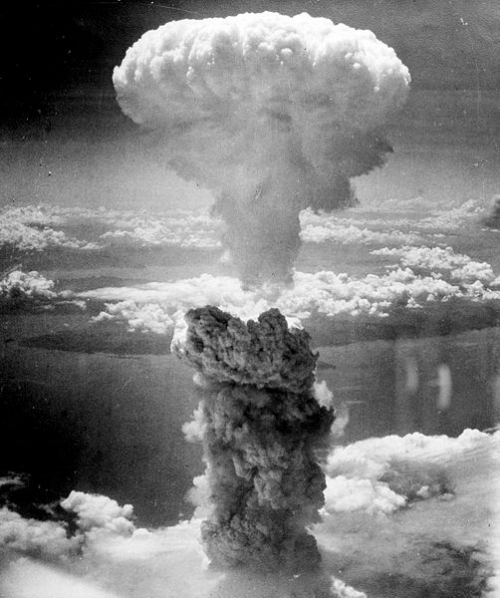 The mushroom cloud of the atomic bombing of Nagasaki, Japan rose some 18 kilometers