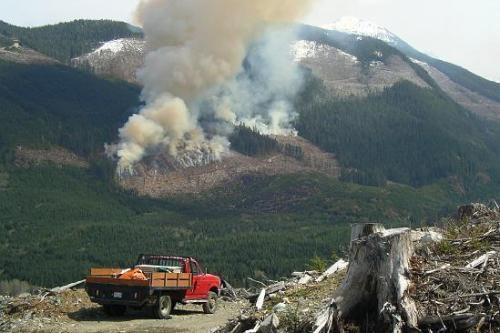 You fall asleep yearning for a clear, fresh morning sky, the sharp blue you've allowed yourself foolishly to grow used to in a B.C. summer.  You awaken to an acrid  mist devoid of moisture, a new predicament in your lifetime---the offspring of burning forests miles over the mountains that separate the island you stand on from Lilloeet and Lytton. Lightening strikes have ignited a holocaust in the forest and blotted out the artifice of distance. Beneath the veil, the world shrinks. You wish not to notice how eerie the world looks, or how hot it feels. You can't see the flames.

I travelled for the first time last week into haunting landscapes of fire scorched BC.  Miles of skeletal trees appeared burnt, their trunks blackened, their limbs shriveled and naked of greenery. But these hillsides of  corpses had died of starvation and not by fire.  Like humans confronted with a plague, the elders "usually succumb first," Wikipedia says, as the phloem layer is damaged enough to cut off the flow of water and nutrients. "After particularly hot summers, the mountain pine beetle population can increase dramatically, deforesting large areas."  Still erect, these pines looked like humans  caught in their tracks as they fled a volcanic eruption, stone dead, yet erect.

The fires scorched unseen mountains..."way back," the manager of the best hotel in downtown Lilloeet told me when we stopped in for lunch.  Hours before, I'd taken three boys for a walk into the Stein Wilderness.  Way back. No sign of fire.

The province sent in a thousand fire fighters to cope with the acres of conflagaration. Some booked rooms at the hotel, days before a water bomber crashed on Jackass Mountain outside of the tiny town of Lytton, meeting its end on a cliff in the Fraser River canyon.  "Lightening strikes.  Ten trees ignite.  The wind gusts up and ten become ten thousand."  Four hundred fires, CBC reported, had burned through province's firefighting budget by August 1, and yet the combustion raged on.

People who lived here for more than 30 years said they'd never seen or smelled smog like this.  A man from Gibsons wrote me on Facebook:  "Lived here 33 years.  Never seen anything like it."

As I drove to Squirrel Cove with my friend, Ruth, last night, my eyes burned. The air went hard into the lungs.  They sky hung as uncomfortably upon us as a too heavy blanket on a warm body.

It reminded me of the world in the Book of Eli, I said.

"This must have been what it was like in NYC after 9/11," on old friend commented this  morning.

"It was nastier stuff in the air then," I said.  "But it looked just like it looked yesterday."

"It made me think about all the what ifs.  What if it never goes away.  What if it were always like this," she said. "But it's gone, and the world's so beautiful."  We walked towards the garden.  "Another reason to appreciate everything we have."

Life in smoke and ash