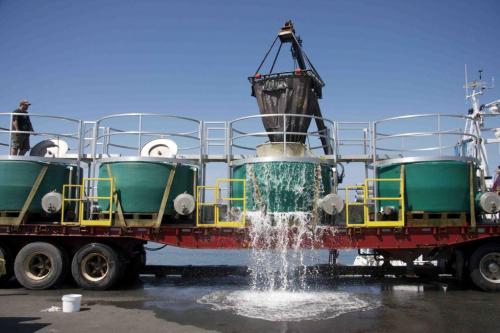 On the eve of Earth Day, a private citizen has succeeded in her quest to enforce Canada’s laws in the case of illegal possession of wild salmon in British Columbia by Marine Harvest, one of the largest multi-national fish farm companies in the world.

For years, biologist and advocate Alexandra Morton has been observing marine habitat destruction and wild species decline on the British Columbia coast. She saw orcas disappear from the Broughton Archipelego. As Morton turned her keen gaze to wild salmon, she learned about more than biology.

In June of 2009, witnesses discovered young wild salmon falling from farmed salmon catch being off-loaded by Marine Harvest. This is illegal in Canada. Marine Harvest admitted in the newspaper to catching the wild salmon. In spite of this, Morton realized applicable laws weren’t being enforced against Marine Harvest to protect our declining wild salmon stocks.

“By-catch” is fish caught without a licence while fishing for other species.  By-catch is strictly controlled in all other Canadian fisheries and in some cases, illegal by-catch can trigger shut down of an entire fishery.

Through her own efforts, Morton has been battling in Court on behalf of the wild salmon. In a landmark initiative, Todd Gerhart, Federal Department of Justice (DOJ) advised the Court that on April 16, 2010, DOJ filed a new indictment against Marine Harvest. It includes the original charges laid by Alexandra Morton as well as new charges for unlawful possession of herring reported in October 2009.

Mr. Gerhart will be the prosecutor. Morton and her lawyer Jeffery Jones are relieved.

“It is my strong opinion,” says Mr. Jones, a former Crown Prosecutor for DOJ, “that this industry was given access to the BC coast and appears to have been conducting itself as if it were above the law. Today’s decision by Mr. Gerhart and the Department of Justice confirms that no corporation is above the law. This is why private prosecutions are important democratic safeguards. Ms. Morton’s prosecution has triggered enforcement action by DOJ.”

“For decades we have heard reports of wild fish trapped in fish farms, eaten by the farm fish and destroyed during harvest,” says Morton, “but when DFO was informed of these offenses they would not, or could not, lay a charge. Canada cannot manage wild fish like this. You can’t regulate commercial and sport fishermen and then allow another group unlimited access to the same resource. BC will lose its wild fish.”

In 1993, the Pacific Fishery Regulations exempted salmon farms from virtually all fishing regulations. Unlike commercial fishermen, salmon farmers can use bright lights known to attract wild fish. The oily food pellets they use also attract fish and wildlife.

Canadian commercial fishermen are required to pay for observers and cameras on their vessels that record by-catch, so that fishing can be halted to preserve non-targeted stocks.

Until now, commercial salmon farmers are exempt from these requirements, despite regular reports of black cod, rock cod, herring, lingcod, wild salmon, pollock, capelin and other species in Marine Harvest pens and, also in stomachs of their farmed fish.

“This is a ray of hope that we can work through the issue of Norwegian salmon farming in BC waters. I am thankful to hand this over to the Department of Justice.  Aquaculture is not the problem. The problem is the reckless way government [positioned Marine Harvest's pens near existing wild salmon runs], managed it and gave it priority over the public fisheries. I call on government to protect the families now dependant on this industry as it undergoes the long overdue scrutiny of the courts, the judicial inquiry and public opinion,” said Morton.

With thanks to Alexandra Morton for supplying a press release with the substance of this story.