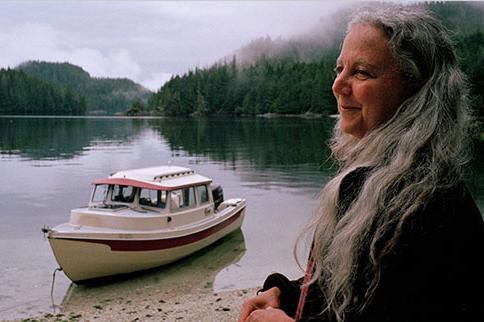 Alexandra Morton’s study of our West Coast salmon in natural and disturbed habitats reminds me of Jane Goodall’s field research with the wild chimpanzee. Morton’s home and research station is about 250 miles north of Vancouver in the Broughton Archipelago.

We in the city can eat salmon by going to the store and buying it, so it’s easy to forget where salmon really comes from. Alexandra lives alongside of and observes the life cycles of nature and of wild salmon. In the Broughton, one catches one’s own food; there are no roads; and if one wants electricity, one finds a way to generate it. It is a lush and partially protected habitat with a stunning diversity of plants and animals. BC’s largest marine park is here.

Vancouver’s Shiro Japanese Restaurant, in the mini-mall at Cambie and 15th, only serves wild salmon. But, quite often, we, in the city, don’t really know whether we are consuming wild or farm salmon. By listening to Alexandra Morton’s message, I learn farm salmon are the leading cause of the collapse of the Broughton Archipelago’s ecosystem. Morton is a self-trained and recognized biologist.

To Marine Harvest, the world’s largest producer of farmed salmon, the Broughton is a multi-million dollar business. The company raises farm salmon in open containers and exports much of it to the US. Strange, because of the ethical and environmental disconnect: Alaska recognizes the dangers of fish farming and the practice is banned there. Morton published a research paper in Science magazine two years ago demonstrating sea lice are killing enough wild pink salmon in the Broughton Archipelago to wipe out the species within what is now only eight years.

In the New York Times video documentary about her work to save the wilds of BC, Morton says, “The [wild] salmon are the keystone species of the ecosystem…” She gesticulates with her hands in a continuous circle, “they bring in the nutrients from the open ocean and feed so many species here. They are what make it work.”

Alexandra describes the effects of Marine Harvest’s production facilities. “When the fish farms came to town, they seemed like a good idea, but diseases and toxic algae blooms started to appear. The whales vanished. Pretty soon, I realized the whole eco-system was crumbling under the weight of this industry.” In undisturbed habitats, sea lice, a parasitic crustacean, co-exist harmoniously with wild salmon. But when open-container salmon farms locate near wild populations, the sea lice quickly overpopulate on both wild and farmed salmon. Then they gradually destroy wild salmon runs, which in turn causes further destruction to the ecosystem as a whole.

Morton points out a mother black bear grazing and says, “she looks so skinny. She’s got two babies she’s nursing and she’s trying to gain weight on grass and berries. But she really needs the salmon to return...” Salmon naturally migrate. In the cold, open ocean they shed what would be harmful sea lice. Farm salmon are stuck in netted containers where it’s easy for the sea lice to multiply. Marine Harvest treats their salmon with antibiotics and pesticides, which impacts but does not totally eradicate the sea lice.

Young wild salmon can’t handle sea lice. The problem is the fish farms in the Broughton and other places along BC’s coast are in the way of wild salmon runs. When the juveniles swim by areas, such as Marine Harvest’s fish farms, where there didn’t used to be sea lice, they catch the parasite and die prematurely.

Alexandra has been one of the leaders in a public outcry demanding protection for wild salmon and their habitats. Against government and corporate resistance, advocates are making progress. Morton and her supporters recently had a win (of sorts) in a Port Hardy courtroom when the judge approved a charge against Marine Harvest; a summons will be issued to the company to appear in court and a trial could follow.

The federal government responded to public protest and lobbying efforts after the Fraser River sockeye salmon collapse, by announcing a Judicial Inquiry. Morton compares the urgency of action on BC’s salmon to what should have happened for the Atlantic cod fishery before it was wiped out.

To learn more about the serious problems with farmed salmon and proposed solutions, visit the Coastal Alliance for Aquaculture Reform (CAAR) website.

You can help. Sign the petition to the Canadian Fisheries Minister. Find out more about Alexandra’s work and/or contribute money to support the ongoing court challenges to protect wild salmon and their habitats.

I know I will be thinking a lot more about what kind of salmon I eat in Vancouver and how much of it. Hope you will too.

Photo of salmon by Alexandra Morton.