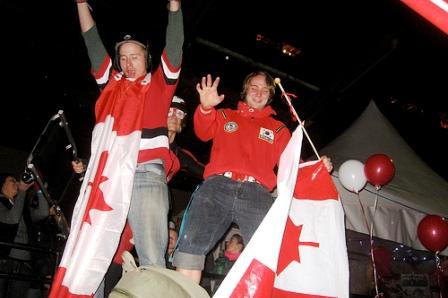 Decentralized dance party on the streets during the 2010 Olympics uploaded on February 14, 2010 by dooq

This is the third article exploring how International Olympic Committee (IOC), as a controlling dominator energy, cast a dark shadow over Vancouver during the 2010 Vancouver Olympics. It shut local businesses out from profiting from the event and it attempted to re-define the vast, multidimensional complexity of Canadian people into insulting one-dimensional cartoon figures.

Another aspect of IOC’s darkness was its attempt to manipulate and control the people and their Olympic stories. It failed to do so for many reasons that, in my opinion, come down to the fact that we are Canadians: relatively free sovereign beings who stand in our power and claim our space as rightfully ours. It is an example of what Mark Lakeman of City Repair in Portland, Oregon calls “placemaking” where people claim their space in their community as belonging to them.

Lakeman defines “placemaking” as “creating a shared vision. While professionals are respected as technical resources, the community is the driving force so the world we inhabit reflects who we are. Placemaking is as much about psychological ownership and reclamation of space as it is about physically building a place. Creating a common ground that transcends the differences among people powerfully addresses isolation and creates an environment where people feel like they can do anything they set their collective minds to.”

Sovereign beings are a problem for dominator energy. As sovereign Canadians, we are grounded deeply in our own time and space, fully occupying and claiming it. We do not need externally referenced authority figures to tell us what to think, who we are, or how to live. Sovereignty is the ultimate goal of placemaking. First Nations peoples have always been powerful models of placemaking and thus a serious problem for the dominator energy of governments. Here in Vancouver, most of us acknowledge that we are living in the unceded territory of the Coast Salish peoples. This acknowledgement has huge implications for freeing us all. Our ignorance in not understanding the significance of honouring First Nations peoples’ wishes to rename Stanley Park XwayXway is our loss.

The dance between these two fields of energy, the sovereign and the dominator, has been fascinating to analyze. In the end, from my perspective, with respect to the Olympics, I say, “We owned it.”

Social media exemplifies individual sovereignty and so it has always been problematic for the Olympic machine. In an interview with Maurice Cardinal, author of the book, Leveraging Olympic Momentum, he said that IOC's rules legally bind any official group involved with the Olympics to saying only positive things about the experience. This meant mainstream Olympic media sponsors could not criticize what occurred.

“The IOC has based its relationship with the media largely on a system of control: very tight regulations about the Olympic trademark, what can be said, what can be used, who can shoot images, what video can be published,” says Alfred Hermida, a professor at UBC’s journalism school. “That system of control….doesn’t work in an internet age when, basically, we all carry around with us the tools to be journalists.”

During the Olympics, social media took the opportunity to take center stage. At competitions, celebrations, protests and cultural events, ordinary people as well as social media participants blogged, Twittered, Facebooked, IPhoned, and filmed anything that moved. As Kris Krug of True North Media House told me in an interview, “It was an experience of people reclaiming the power by using social media to tell their own unique stories.”

As a result of social media’s participation, different stories got told. The Red Tent campaign, for instance, brought attention to the chronic homelessness in Vancouver that IOC tried to hide.  Reilly Yeo, a volunteer with Red Tent, said that they deliberately chose to fight the Olympic symbolism with their own symbols. They dropped a beautiful 45’ banner off the Cambie Bridge with police permission. Social media documented it. 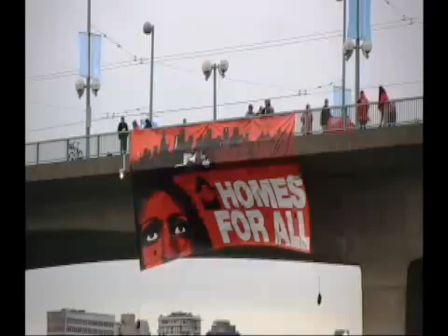 Canada Day 2010 saw Vancouverites doing what we love to do: coming together to play and celebrate being a community.
Kathie WallaceJul 1st, 2010 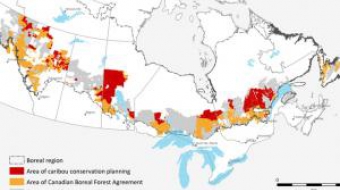 As one of the lead organizations in an initiative of nine environmental organizations working with 21 logging companies, the non-profit organization, Canopy, signed the Canadian Boreal Forest...
Kathie WallaceJul 1st, 2010
Speak up about this article on Facebook or Twitter. Do this by liking Vancouver Observer on Facebook or following us @Vanobserver on Twitter. We'd love to hear from you.