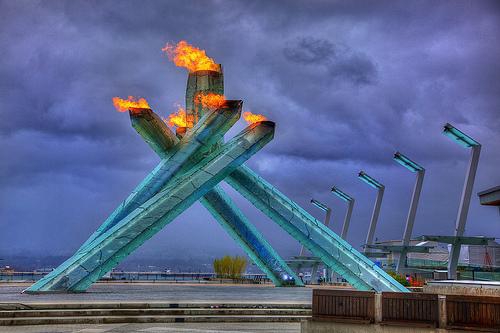 This is the second in a series of four articles on the dominator energy that came to town as the Olympics. The first article explored how the International Olympic Committee (IOC) misled businesses about the potential economic benefits that would come from hosting the Games. Bullying, coercion, and intimidation cast an unsettling shadow over the whole event.

Along with competitions, celebrations, and cultural events, IOC brought an energy field of darkness to the city.  In order to gain maximum profit from the event, IOC caricatured the people of Vancouver, turning them into stock figures at best and cartoon figures at worst.

It is well documented but often forgotten what IOC really is.  An insider describes the illusive, always-in-transit corporation like this:  "IOC is the least accountable multi-national corporation in the world.  It comes in, uses local resources, lives on tax dollars from the countries that host it and then vanishes...always leaving a large debt."

The smoke and mirrors of mad flag waving and false patriotism obscures this practice long enough for IOC to extract huge profits. Where do the profits go and who is the "THEY" that runs this whole show and keeps it going?  Maurice Cardinal, author of “Olympic Momentum”, is clear about who does not benefit.  Ironically, the athletes whose efforts are what create the Olympics make little in return, except for the gold medal winners who are able to leverage their wins into horse and pony shows, recounting their story over and over again at events arranged by major public relations firms representing these lucky few.

Cardinal has much to say on the subject of the smoke and mirrors manipulation of IOC.  He says IOC could never work its dark magic without the eager cooperation of the media.  Individual journalists may honestly wish to cover all dimensions of the story but with IOC pouring money into the advertising sections of their newspapers, Cardinal postulates that media management sets the tone for reporters to become Olympic cheerleaders.

During the first week of the Olympics, negative comments about the Games appeared widely even though Global TV, CTV, the Province, the Courier and the Vancouver Sun enjoyed lucrative Olympic sponsorship roles. Initial media reports focussed on the whole spectrum of protests and criticisms of the Olympic machine.

A young Georgian luger Nodar Kumaritashvili was killed in the luge competition on day one of the Olympics. The media also headlined Nodar’s death as a negative reflection on the Olympics. The luge track was paid for and undertaken by the Canadian Olympic Committee (COC). COC ignored reports of it being dangerously fast.  IOC blamed the luger for his death as did Olympic media partners.

When Alex Bilodeau won the gold medal for men’s moguls in the second week, the whole energetic mood in Vancouver changed overnight. Prior to that event, CBC’s Peter Mansbridge was excited to invite Cardinal to participate in a panel discussion about critical issues emerging from the Olympics. This panel never happened because “patriotism” kicked in, Cardinal said. He speculates this is where IOC sponsorship dollars may have begun to play a pivotal role, taking the win and using it to whip up a frenetic patriotism.