When the dominator energy came to town: the real IOC 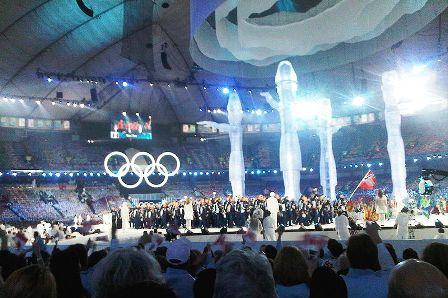 There is a darkness that keeps calling me to its story. It is the story of the International Olympic Committee (IOC)’s tactics to control and dominate Vancouverites leading up to and during the 2010 Vancouver Winter Olympics.

Whoever tells the stories of our experiences influences millions of minds. The IOC, through the Vancouver Organizing Committee (VANOC), has painted the Vancouver Olympic experience in rosy colours as a wonderful, feel good, “when-we-all-came-together-as-a-country” experience. This is a one-dimensional and skewed perspective that insults our intelligence.

What happened is very different. In the next four articles, I am going to explore eight IOC lies: the Olympics as good for business and good for the city, the patriotism lie and the disrespectful treatment of the Four Host First Nations peoples and the Inuit, the (un)embrace of social media and the bullying of protestors, and finally the true purpose of the Cultural Olympiad and the security measures.

I want to thank Maurice Cardinal for many of the background facts in these articles. Maurice tracked the Vancouver Olympics daily from 2003, noting what mainstream media was saying, researching, and publishing a book called leverageolympicmomentum.com in 2006. Maurice wanted to make a record of what he thought was going to happen during the Olympics. Then he launched a blog, olyblog.com, in 2004 because things started changing so rapidly he needed to start documenting regularly. The book became the historical anchor for his blog. Maurice describes himself as a “passive activist who writes and shares knowledge”.

Good for Business and Good for the City

VANOC is a franchise of the IOC like Macdonald’s franchises. The IOC sells franchises to hold Olympic Games, setting the rules and terms regardless of whether it is good or not for the community. VANOC, who owns the Vancouver Olympic franchise, is also the company that manages it as a business. John Furlong, Chief Executive Officer of VANOC, does not work for the community but rather for the IOC. In his capacity, it is not his responsibility to protect or represent the community of Vancouver. Although Furlong might want us to think that he is a great proponent of community, it is not true.

A franchise has to be competitive and VANOC manages a monopoly on the business to do so. VANOC’s job was to make money for the IOC rather than helping to sustain or benefit the host community. For example, 32 people paid $300,000 each to have anything they wanted during the Olympics. This money went to VANOC. There has been no report on who these 32 people were and there was an interesting lack of celebrity profiling during the Olympics.

At the 2008 Beijing Olympics, Steven Spielberg bowed out of being involved in the event because he did not want his name attached to it. Celebrities did not move forward to participate either. At the Vancouver Olympics, there were few “big name” artists. Wayne Gretzky seemed to be a reluctant participant.

“Businesses were warned that if their primary motivation to become involved with the Olympics was to make money they would be disappointed. They were told their motivation should be about doing something good for the community, and to raise the visibility of their company, which would help them sell their products or services in the future. They were told they could make money from the Olympic experience, but not to expect that it would occur directly,” said Maurice Cardinal.