Past the screen
Dealing in what Farrington refers to as “the child-like desire to be inside a film,” something he feels we all have in coming, he wishes to get us past the screen’s surface. This artist wants to “give the audience that experience” of not being an actor, but being inserted into the rhythm of the film, not simply outside, viewing it passively.

During the development of the project the artist went through the original film enacting his “extracting exercises” of putting the film, scene by scene in different edits, paying particular attention to actress Falconetti cinematic takes, all in close up as per Dryer’s insistant vision of the this epic and historic story. Initially Farrington was planning that the audience would see the actress as the only cinematic image in whatever iteration he ended up putting forth, editing out the other original actors. But more artistic considerations came calling and more images from the original will be on stage in the production as it arrives at Pacific Theatre here in Vancouver.

About film as his inspiration: “I choose films that have very heavy emotional components. I want an audience to engage in a very physical way. That’s what theatre is for me.”

Digitizing and re-arranging images is clearly not enough for Farrington. He enjoys the physicality of the old movie machines and the celluloid itself, something the audience witnesses upon entering the theatre. While cherishing his experiences with the “texture that is appropriate in working with this film” Farrington “takes textures, what the film is about, what the characters are wearing, focusing on the history” and relishes re-coding them as textures for his own work. He salvages, recovers, re-uses, re-organizes, all in a bid to engage the audience into the process of the project. In all this he has isolated a directorial and set design method to involve the audience in the process of passion itself, the Passion of Joan of Arc and the passion inherent in a full expression of feeling.

As part of PuSh Festival:

Matinee Saturdays at 2pm Artist talk with Reid Farrington and Stefan Smulovitz (The Passion of Joan of Arc), led by Ron Reed Jan 27 at 7:45pm

From PuSh Festival:
This show is fully eligible for PuSh Pass access.

Reid Farrington’s The Passion Project is an electrifying work that compresses the entirety of Carl Dreyer’s classic silent film The Passion Of Joan Of Arc into a 30-minute concentration of movement, projection, installation and sound collage. The audience surrounds a 10x10 foot area, flooded by four projectors, in which Laura K. Nicoll meticulously arranges and rearranges a number of parchment screens in a series of choreographed movements that explode the film into three dimensions. A transformative and dynamic sculpture takes form as the hanging canvases grab hold of the fleeting, flickering images.
Tickets $17-24 at the  Pacific Theatre Box Office 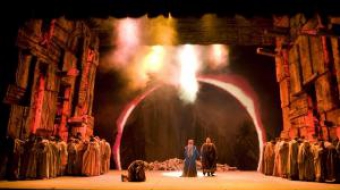