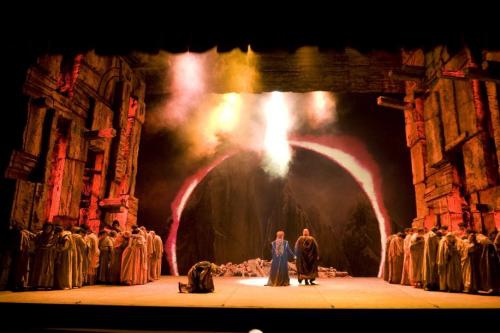 Notice final scene of Norma with Maestro Richard Bonynge at bottom, distinguished white hair the only feature of the dark orchestra pit. Photo by Tim Matheson

What I want to do when I grow up a few decades from now is to be Maestro Richard Bonynge (pronounced BONNing.) Over the next few magical days at the wonderfully re-furbished (very mid-century) Queen Elizabeth Theatre, the Vancouver Opera is celebrating the launch of its 50th season with a repeat of a Bonynge Norma, Bellini’s tender and yet commanding Bel Canto opera. The last time he conducted it here was in 1963 and it was his debut as a Bel Canto expert. It put him and his now-iconic wife, soprano Joan Sutherland, on the opera map. So he and the original cast have always had a soft spot for Vancouver audiences. They cast a London recording of the opera the next year and there was no turning back. And Vancouver Opera was launched internationally. Catch something of the history of this week’s events with this television production of “Casta Diva” with Sutherland on Youtube: http://www.youtube.com/watch?v=EJ2L_B7VOWs

Is it any wonder that orchestral and opera conductors live very long lives? This is often attributed to their aerobic exercises on the podium, but I think it is their passion and their discipline, something Maestro Bonynge is deeply engaged in long after the average jock has turned out the lights. Bonynge has dedicated his artistic life to the underrated Bel Canto.  Bel Canto, literally “beautiful singing” (please see: http://en.wikipedia.org/wiki/Bel_canto), made a comeback tonight in Vancouver and so did the irrepressible Richard Bonynge.

If you witness this present production you too will dream of being 79 and conducting with the precision of Bonynge, the master musical knitter, casting his musical knit and purl as perfectly and passionately possible for the musical robes of a powerful Druid priestess. The intricacies of Bellini’s Norma are matched by the Maestro’s aplomb, with his focus on the weaving vocal lines, yet never treating the orchestra or chorus as mere accompaniments, but always as equal partners. All his years of study in his native Australia, accompanying singers as an equal at the piano have paid off.

Norma is set during the Roman occupation of Gaul, of all places, around 50 BC. The bel cantists thought that the murky and rusty ambiance of Druidic Gaul (Northern France and Belgium) was weird and wonderful. Norma is a Druid priestess who becomes secretly involved with a Roman officer with two children to prove it. How she keeps them secret, no one asks.

Despite religious ethics and mores, patriotic feelings under the Roman oppressors, and a two-timing tenor, the libretto does not really get beyond the talking—which is what Bel Canto thrived on. The stage director is challenged to make dramatic theatre out of talk show dialogue so stage director Tazewell Thompson manages only to conjure up standard action, a perfect set up for Kate Aldrich, singing the role of Adalgisa, who is not a stand-and-sing kind of gal. A star is born right before your eyes—worth the price of admission.

In this present cast and ensemble you can hear intelligent singing, musicianship that finds a subtle artistic way through all those notes and conversations, a bit of Joan Sutherland, a bit of Callas, a bit of what makes the present cast stars in the Sydney Opera House, Theatro Comunale di Bologna, The Met, and other famed settings.

Soprano Hasmik Papian in her Vancouver debut embodies the classic Euro-soprano style. She offered subtle, controlled nuance from her voice, but little menace vocally or dramatically—her repeated Medea-like movements: Left arm completely up, right follows, or both extended simultaneously in Etruscan “I give up” sign in both acts causes one to think the Druids have stiff rules about expression and have not heard of letting off a little steam now and then.

Papian has performed Norma in Baltimore and Monte Carlo, and Donizetti’s Roberto Devereux in Dallas. Mezzo Soprano Kate Aldrich, also making her Vancouver debut, has just sung the role of Adalgisa, Norma’s subordinate and troubled-in-forbidden-love priestess, at the Theatro Comunale di Bologna. Lucky Bolognese. Tenor Richard Margison has sung for Vancouver Opera for a million years—he blasted in Act One and calmed down in Act Two, playing the twerp stand-around-stage version of Pollione, the Roman proconsul.

Takes Us With Her 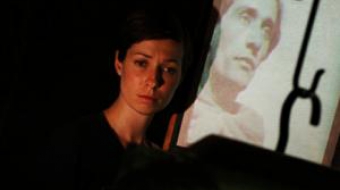 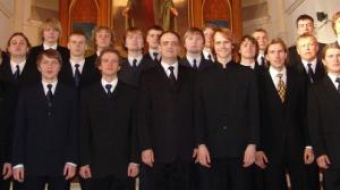