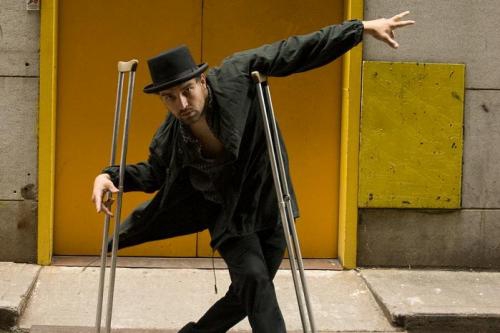 The beat goes on for the Vancouver 2010 Cultural Olympiad throughout the Paralympic Winter Games, which will fill 10 exciting days with athletic and artistic firsts starting March 12.

The Cultural Olympiad kicks off its Paralympic programming with the world premieres of two highly anticipated plays. Spine, which debuts March 12 at the new SFU Woodward’s complex on West Hastings Street, is a mind-blowing piece of multimedia theatre from the creative team behind the comedy hit Skydive. The play follows Realwheels Theatre founder and actor James Sanders as he flies away from his body and wheelchair — perhaps from his whole identity — into a virtual reality world.

Reinvention of another kind is at the heart of Rick: The Rick Hansen Story, which opens on March 13. Written by British Columbia playwright Dennis Foon, it starts with young friends on a fishing trip and a car accident that leaves none of them untouched. In real life, Hansen went on to become a Paralympic medallist and activist, bringing accessibility and spinal-cord research to the world’s attention with his Man In Motion tour. And his role with the Winter Games goes beyond serving as an inspiration for this Manitoba Theatre for Young People project; he is the honorary mayor of Vancouver’s Olympic Village.

For dance aficionados and newcomers alike, March promises to be a special month. There is Canada’s reigning queen of contemporary dance, Marie Chouinard, unveiling a brand new work on March 12 and 13, and a jam-packed edition of the Vancouver International Dance Festival (VIDF), which will see 12 Canadian and international companies taking to stages across the city from March 12 to 21.

The VIDF closes with two nights of performances presented by Vancouver’s Kickstart (Disability Arts & Culture). Configurations (March 20 and 21) features performers Bill Shannon, who uses his crutches as an extension of his body to display a remarkable array of movements, and contemporary dancer/choreographer Peggy Baker, one of the best movers of her generation. She will present a special solo piece — set on a tilted platform — at Kickstart’s March 21 gala.

Many of the Cultural Olympiad’s visual arts exhibitions continue through March, and several events return after post-Olympic breaks: The Miss Guides’ history-filled GOLD RUSH! walkabouts and World Tea Party, with interactive events scattered across the Downtown Eastside — in the Centre A gallery, local parks and community gathering places — will both run throughout the Paralympic Games.

Across town, in Robson Square, the lauded exhibition, Out from Under: Disability, History and Things to Remember, will make its Vancouver debut on March 7. The award-winning exhibition innovatively displays 13 everyday objects that tell moving stories about living in Canada with a disability.

There is no shortage of music on offer, from Canada’s National Arts Centre Orchestra to Israeli party band Balkan Beat Box and Hilario Duran’s Latin Jazz Big Band. On March 15, acclaimed violinist Adrian Anantawan will join the Vancouver Symphony Orchestra (VSO). In addition to playing with the world’s best orchestras and conductors, this young virtuoso, who was born without a right hand, is a spokesperson for the Child Amputee Program of the War Amps. Anantawan will perform Gustav Holst’s challenging and thrilling The Planets Suite, among other works, with the VSO at Surrey’s Bell Performing Arts Centre.

All this and we haven’t even mentioned one of the world’s most artistically gifted circuses — Montreal’s Cirque Eloize — or theatre happenings Body & Soul and Hive 3, or even an amazing two-night tribute to one of the best bands of the 1930s, the Mississippi Sheiks. Check the Cultural Olympiad’s online listings for these and other must-experience events during the Paralympic Winter Games.