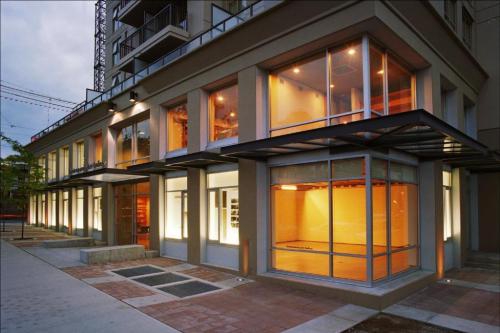 Art competition inspired by the Olympic Games heats up.

When Vancouver’s Contemporary Art Gallery (CAG) sent out electronic invitations to an upcoming group show, contributing artist Jonathan Middleton made a few small changes to his invite before passing it along.

“I systematically replaced the curator’s title with my own and made it look like I was just forwarding it along from the gallery,” says Middleton, who changed the original title, An Invitation to An Infiltration to Strange. The first time I've known of a piano with four legs… (Hey! I keep falling down!). The infiltrated title is a line from a 1950s British radio comedy called The Goon Show. It refers to a scene where the main characters are duped into stealing a piano from the Louvre Museum in Paris.

“I thought it was an interesting analogy to working in a group situation with one goal of subversion,” says Middleton. “We might end up subverting ourselves instead of the institutions.”

An Invitation to An Infiltration, organized by guest curator Eric Fredericksen, examines the competitive aspect of group art shows. Rather than critiquing the natural competition that arises when work by different artists are viewed together, Fredericksen is embracing this competitive spirit — even if it leads to infiltrations of his own work.

“Since the Olympic Games are all about competition, we thought this would be an interesting way to build the relationship between art and athletics,” says CAG curator Jenifer Papararo.

When competition heats up, some people will try to cut corners. In an homage to this, the award-winning duo Hadley + Maxwell have erected a marble pedestal representing statues of Zeus, which were erected in ancient Greece when athletes were caught cheating.

Most pieces in the show have either visual or intellectual references to the Olympic Winter Games, from wallpaper made of linked rings made by New York-based two-man team Dexter Sinister to a public conversation between a game theory expert and a hockey coach after the men’s semi-final hockey game.

Middleton says he thinks he’s succeeded in changing the working title of the show to his own Goon-inspired version. To get there, Middleton had to use several subversive tactics, including making his own signs for the gallery.

“[Frederickson] wasn’t going to facilitate my title. I had to be subtle so I could quietly erase his title.”

More information on An Invitation to An Infiltration