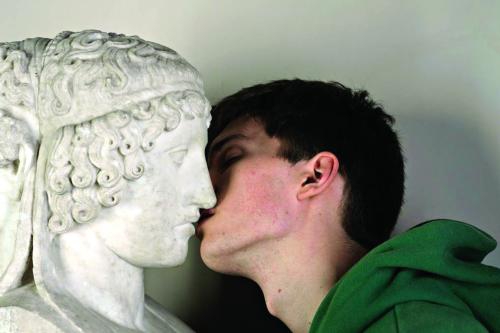 Vancouver’s rainy grey streets will be getting some colour from a public poster project that will see billboards, transit shelters, Canada Line transit stations and SkyTrains swathed in thought-provoking art.

Intended to encourage passers-by to think about the use and function of public space, Endlessly Traversed Landscapes was curated by Canadian artist Natalie Doonan and will appear across Metro Vancouver from January 22 to March 21 as part of the 2010 Cultural Olympiad.

The project’s title references an essay by French filmmaker, poet and theorist Guy Debord, who discusses “endlessly traversed postcard landscapes” in reference to the picture-perfect realities crafted by public advertisements.

Each piece will be deliberately placed in a location based on the context of the image. For example, a collage by Toronto-based artist Sandy Plotnikoff showing a scenic Italian landscape with the words “HOLIDAYS CANCELED” will be placed in the city’s Downtown Eastside neighbourhood.

Canadian art star Jason McLean’s three metre by six metre (10 feet by 20 feet) collage of a men’s 1920s rugby team has a very literal connection to the space it will occupy. Displayed outside the Patricia Hotel on East Hastings Street, the image is chock full of references to the nearby Strathcona community and some of McLean’s old haunts.

Although the project uses public space to host the images, Doonan says she’s not sure it exists in a “real way.”

“Public space is very heavily regulated. What it should be used for is not really a question that can be answered; it’s one that’s under constant negotiation and I think it’s being played out in this project.”

“Endlessly Traversed Landscapes” runs from January 22 to March 21 at various locations around Vancouver.