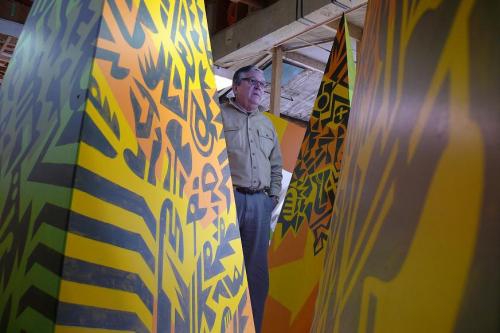 In Ikons, two master artists collaborate on a high-tech, and very west-coast, sculpture and music experience.

Ikons is an interactive art installation that has been a long time coming. For nearly three decades, Vancouver performance and visual artist Eric Metcalfe and legendary American composer, trombonist and intellectual George Lewis have been skating around the same circles, waiting for the right time to collaborate.

It seems that right time is now.

“In early 2007, George approached me and asked me if I’d like to work on a piece with him for the Cultural Olympiad. I said I’d be delighted to,” says Metcalfe, who is a Governor General award-winner in visual media arts as well as the co-founder of the influential Western Front artist-run centre in Vancouver’s Mount Pleasant neighbourhood. “I really enjoyed this project. It was very exciting, because I took it in a direction that, quite frankly, has gone far beyond my expectations.”

For the piece, which will be on display from January 28 to February 28, Metcalfe has created seven vibrant hand-painted sculptures, each about eight feet tall, that will house sonar sensors and speakers. The exhibition space will be full of recorded music composed by Lewis and performed by Vancouver’s contemporary/classical Turning Point Ensemble.

In a high-tech twist, Metcalfe or Lewis won’t be the ones deciding what the viewers hear.

“The computer program knows whether you’re passing through, or if you stay for awhile, and it acts differently and sends you different material depending upon what it infers from your degree of involvement with a certain area,” he says from his home in New York.

“You multiply that with the number of people who could be in the space at one time, and you wind up with the piece being a site for a kind of sociology. The composite sound is basically a result of who is in the space and what they’re doing.”

Which means these massive musical sculptures and their site will become a site for social networking between the computer and the listeners. But, says Metcalfe, the process is going to still be very west coast.

“To make it more interesting I built these shapes that come out of the sculptures that evoke birds and fish and west coast wildlife,” he says. “I thought I should make this piece a west-coast homage to many of the things that I experienced growing up here in Vancouver. This is my turf.”