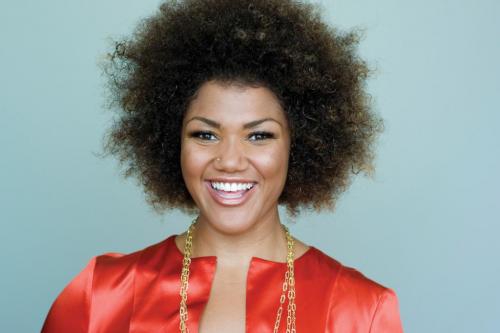 For Fredericton-born soprano Measha Brueggergosman, being on a stage with another soprano is going to be a real treat. Particularly since she’s set to perform Mahler’s extraordinary Symphony No. 8 with some of Canada’s best opera singers.

“Usually, if I show up and there’s another soprano, chances are good we’ve been double-booked,” says Brueggergosman with a laugh from her Toronto home. “What’s very cool about being able to do a piece like this is not only that it’s so rarely undertaken, because it’s so expensive to do, but that you get to see colleagues that you don’t get to work with very often.”

The symphony, which is widely recognized as Mahler’s greatest composition, will be conducted by Bramwell Tovey and performed by the Vancouver Symphony Orchestra in its full scale.

While Brueggergosman says a typical symphony has four soloists, generally a soprano, an alto, a tenor and a bass, this piece has eight. The performance, which has been nicknamed the Symphony of a Thousand, will also feature hundreds of chorus members from the Vancouver Bach Choir, the Toronto Mendelssohn Choir and the Vancouver Bach Children’s Chorus.

“You’ll get these big voices in the front blasting away while it’s reiterated and foundationally supported by all the parts of the chorus,” she says. “We might look like we’re lip-synching, but we’re really singing our guts out.”

The plot of the symphony starts with a Latin mass and develops into the ascension of Faust through the seven rings of heaven. Depicted in billowing choruses and sweeping orchestral passages, the audience sees Faust’s reunions with loved ones, the most notable of which is his true love Gretchen, whose role will be sung by Brueggergosman.

She says the symphony’s plot, which centres on the sublime and redemptive power of love, is also significant because symphonies written in Mahler’s time were generally based around religious texts drawn from the Old Testament.

“The fact that you have a secular story juxtaposed onto a medium that was typically reserved for sacred text was a pretty daring thing for Mahler to do,” she says. “Some parts of it are absolutely astonishing. I could explain it, but Mahler has done such a good job that the piece really needs no explanation. That’s how well it’s written.”

“Mahler Symphony No. 8: Symphony of a Thousand” plays January 30 and February 1 at the Queen Elizabeth Theatre, Hamilton Street at West Georgia, at 8 pm; tickets are $30 to $95.

Tickets and more information on “Mahler Symphony No. 8: Symphony of a Thousand”