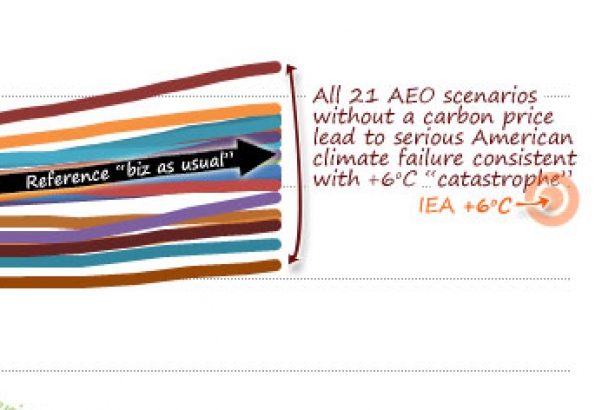 So when the US government's flagship Annual Energy Outlook (AEO) report shows that every American energy scenario they evaluted that did not have a carbon fee resulted in dramatic climate failure -- people around the world should pay attention. To highlight just how badly America fails without a fee on climate pollution I created the chart below from the AEO data. It includes the CO2 projections for all twenty one AEO energy scenarios that do not include a CO2 fee. I've also included America's climate goals as a dotted green line. (click chart to view full size) 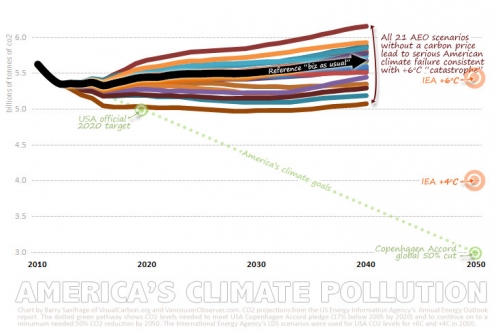 As you can quickly see, every scenario without an economy-wide carbon fee leads to between five and six billion tonnes of CO2 per year as far out as 2040. This is consistent with a climate "catastrophe" of +6oC in global warming according to the International Energy Agency (IEA).

For those interested in avoiding the extreme climate misery that would bring, the AEO report has one hopeful scenario. They call it the "GHG25" scenario. This is their Reference scenario with the addition of "a price for CO2 emissions throughout the economy, starting at $25 per metric ton in 2014 and rising by 5 percent per year through 2040."  This simple carbon fee would single-handedly cut America's climate pollution 40% by 2040. I've added this GHG25 scenario as a bold green line to the chart. 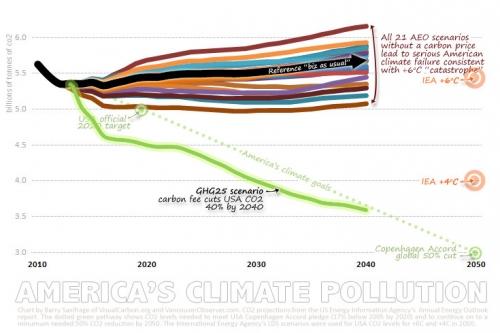 The good news is that America has a simple and quick-to-implement way to achieve dramatic reductions in her climate pollution.

Here in BC we already have an economy wide carbon fee. Our version is an income tax cut funded by the carbon fee. All the revenue from the carbon fee gets returned to the public via the income tax cuts. There is no increase in overall taxation. Instead it is a tax shift away from taxing things we do want (wages) and instead taxing things we don't want (climate pollution). And reports so far say that it has helped cut both our income taxes and our climate pollution without harming our economy.  The BC carbon fee is currently $30 per tonne of CO2. The GHG25 scenario would hit $30 per tonne of CO2 in the USA in 2018.

The Americans might prefer to do other things than cut taxes with the revenue from a carbon fee. One proposal in Congress would return all the money in the form of equal monthly cheques for each American. Cold hard cash handed back every month. People who use less than the average amount of fossil fuels would make money in this version. Again there would be no increase in overall taxation. Another proposal would use the revenue to pay down the debt or shore up Social Security.

The critical point however is that the GHG25 scenario is the only scenario that the US government has shown will meet America's climate goals over the coming decades.

Twenty one ways to lose big

In marked contrast, if a scenario doesn't include a fee on climate pollution it leads to big trouble. Whether it is a scenario of great new technology, or a surge in cheap natural gas, or better efficiency, or higher coal prices, or even a faltering economy for decades on end, the result is the same -- dramatic climate failure by America and thus the world.

Here is the "cook-our-kids" list of all 21 AEO scenarios without a carbon price:

By the way, the expected "Reference" scenario results in almost identical levels of climate pollution as the "No GHG policy" scenario in which America totally gives up trying to limit climate pollution. That is just one more example showing that as long as America allows climate pollution to be dumped into the atmosphere for free then Americans will just keep polluting at extremely dangerous levels.