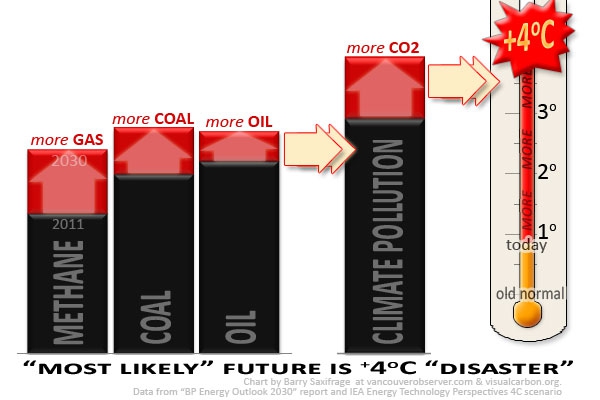 "Fears over oil running out – to which BP has never subscribed – appear increasingly groundless."

And it's not just oil. According to BP, a combination of powerful new extraction technologies, growing 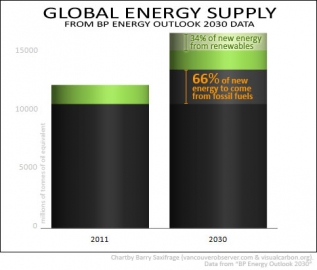 populations and extremely weak climate policies mean humanity is on track to excavate and burn lots more fossil fuels of all kinds by 2030: 15% more oil, 26% more coal and 46% more methane (aka natural gas). In fact, policies still so strongly favour fossil fuels that BP predicts that two-thirds of all new energy over the next two decades will be supplied by increased fossil fuel burning.

Off the climate cliff

Unfortunately for just about everyone, this "most likely" energy comes with one very big downside. If we do burn that much fossil fuel we will crank the global thermostat up 4OC. And that, scientists say, will inflict climate misery on humanity for thousands of years. Out of the peak oil frying pan and into the raging climate fire. Sorry kids.

The consensus of the climate science is that all these things get worse and new extremes will emerge as the world warms. Beyond 2 OC however the changes grow in seriousness and tipping points are likely to be crossed. Nearly every nation on earth has pledged to avoid crossing this 2OC barrier because of the dire threats to civilization that are expected to emerge.

Unfortunately, hitting 4OC seems to be where our fossil fueled energy system is leading humanity even if everyone keeps all our best climate promises so far.

The World Bank calls 4OC both "devastating" and exactly where we are heading. They are so concerned about this that they recently published a report titled: "Turn Down the Heat: Why a 4°C Warmer World Must be Avoided" with the hope that it would "shock us into action." It warns "the world is barreling down a path to heat up by 4 degrees at the end of the century if the global community fails to act on climate change, triggering a cascade of cataclysmic changes" including "extreme heat-waves, declining global food stocks, loss of ecosystems and biodiversity, and life-threatening sea level rise." World Bank President Jim Yong Kim recently wrote in the Washington Post that:

"the world needs a bold global approach to help avoid the climate catastrophe it faces today … If there is no action soon, the future will become bleak … With every investment we make and every action we take, we should have in mind the threat of an even warmer world … "

Lord Nicholas Stern who authored the groundbreaking UK government report in 2006 now says he "got it wrong on climate change – it's far, far worse" and now the world is clearly hurtling toward 4OC or even 5OC:

"This is potentially so dangerous that we have to act strongly. Do we want to play Russian roulette with two bullets or one? These risks for many people are existential."

And now, for the first time I've ever seen, a global fossil fuel corporation is releasing its emissions analysis that confirms our "most likely" future is indeed a devastating 4OC. Of all the dire warning that are pouring forth these days the most unsettling to me is the fact that a purveyor of climate pollution is admitting we are in deep, deep trouble.

Just to be clear, BP's predicted emissions come out of their global economic energy model's "most likely" energy path. This is based on the world's various new technologies, energy policies and climate efforts. This is definitely not a worst-case scenario or even business as usual. In fact their models:

Part 1: Bark beetle just getting started on a continent-wide rampage