More oil sands in the pipeline than the future will want: IEA 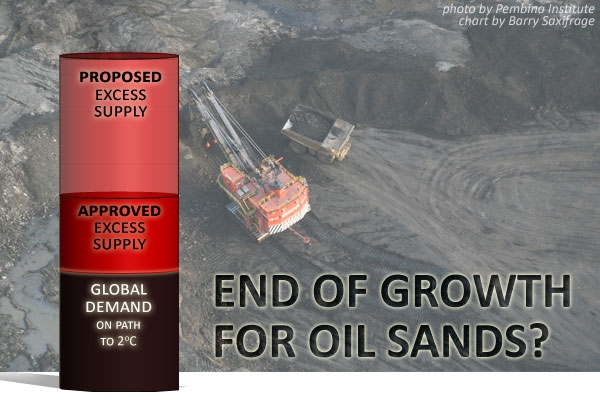 Alberta has already approved far more oil sands production than the world will want according to the International Energy Agency (IEA).

If the IEA is right, it means an end to new oil sands project approvals and probably an abandonment of some that have already been approved. It also means Canadians might want to re-evaluate the need for bitterly controversial new tar sands pipelines—like Keystone XL, Northern Gateway and the Trans Mountain twin.

Let's take a look at some of the details.

The IEA has arguably the world's most detailed and comprehensive database on global energy. Their flagship annual report—World Energy Outlook—is an essential resource relied upon by many of the world's major economies, as well as global energy industries. The IEA's 2010 World Energy Outlook report specifically analyzed future oil sands demand under several possible energy scenarios. In every scenario, global demand for oil sands in 2035 was well below what has now been approved.

What makes this analysis so remarkable is that the IEA is a friendly proponent of the oil sands. They open their report saying "production from Canadian oil sands is set to continue to grow over the projection period, making an important contribution to the world’s energy security." No greenie tree-huggers there.

But the IEA are also hard-nosed economists who include in their analysis the reality that high production costs coupled with high carbon emissions will hurt the competitiveness of the oil sands in the future. They conclude that there are already more oil sands projects in the pipeline than will be needed to supply future demand.

My chart below details this oil supply and demand mismatch: 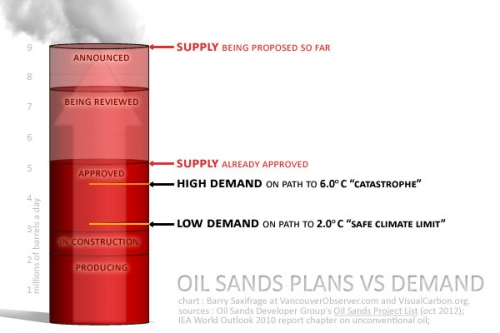 The red column shows that already approved projects will be able to deliver 5.2 million barrels of oil a day (mmbpd). Additional projects to deliver another 3.8 mmbpd are working towards approval. Both the industry and the Alberta government say they are planning for 5.0 mmbpd to be flowing out the taps by 2030, with more supply coming soon after.

For comparison, my chart shows the high-end and low-end of the IEA demand scenarios for the year 2035.

In the most hopeful IEA scenario, humanity limits climate change to two degrees Celsius—which is more than double warming so far. Two degrees is the threshold above which most climate scientists say an overheating climate becomes dire and dangerous for us.

As US President Obama warned in his acceptance speech last week, the "destructive power of a warming planet" is a growing threat that must be addressed.

In this scenario, the IEA says global demand for oil sands will be 3.3 mmbpd. Over a third of the 5.2 mmbpd the industry already has approval for, and is planning to produce, won't be economically viable.

In fact future demand can be met almost entirely with currently producing projects plus those in construction. About 90 per cent of projects already approved but not being built yet won't be needed.

The IEA's most pessimistic scenario has humanity choosing a dirty energy path leading to a climate "catastrophe" of six degrees Celsius of global warming. As the IEA said when releasing their report: "Everybody, even the schoolchildren, knows this is a catastrophe for all of us." (See: Climate “catastrophe” of 6C dead ahead: IEA.)

But, even in this dystopian future of climate misery, the IEA says that only 4.6 mmbpd of tar sands oil will be economically viable. This is still well below the industry game plan of 5.0 mmbpd by 2030, rising to 6.0 mmbpd by 2035.

However you slice it, it is looking increasingly likely that demand for Alberta's oil sands will fall well short of even today's commitments. The endless growth scenario is looking more like a long walk on a short pier. Albertan's would be wise to protect themselves from this risk while they still can.