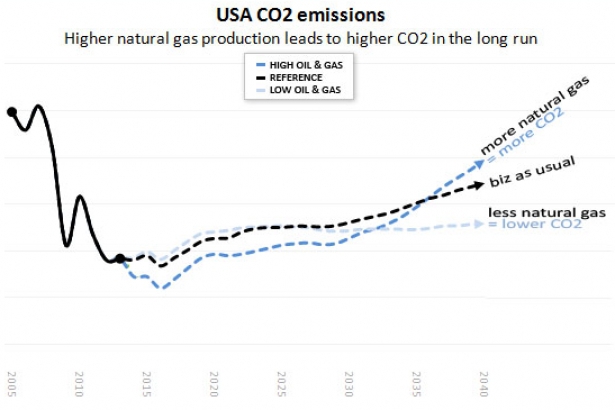 America's surge in cheap fracked gas is acting like a climate change Jekyll and Hyde. In the public eye, fracked gas is being applauded for replacing climate-dirtier coal burning. But behind the scenes, it is also an efficient killer of climate-safer energy projects.

The net result -- according to projections from the US government's Energy Information Agency (EIA) -- will be higher levels of climate pollution in the long run. The EIA's flagship Annual Energy Outlook report projects that the greater the supply of fracked natural gas in America the higher that nation's CO2 emissions will become.

Take a look. This first chart below is from the EIA. It shows their CO2 projections for five different energy scenarios. 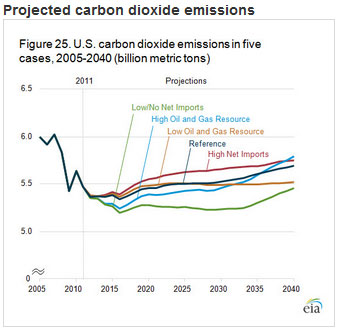 Three of these scenarios differ only in the expected supply of fracked gas and oil:

For clarity, I've created the chart below that shows just these three scenarios. As you can see, the higher the supply of fracked gas and oil, the higher America's climate emissions are projected to become. 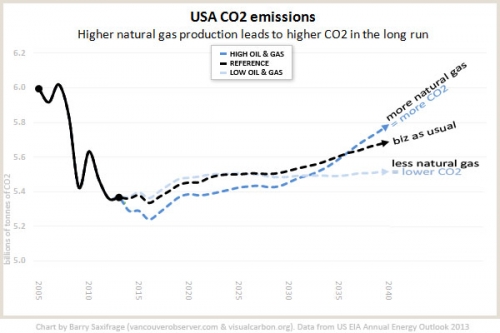 The "Low Oil and Gas" scenario (light blue line) ends up with the lowest CO2 emissions. More importantly, America's CO2 emissions quickly hit their peak in the next few years and then level off for decades.

In contrast, the "High Oil and Gas" scenario (dark blue line) ends up with the highest levels of CO2 in 2040. Even more troubling, look at how fast America's CO2 is projected to be rising at that point. The EIA explains why:

"Although more abundant and less expensive natural gas in the High Oil and Gas Resource cases does lead to less coal use and more natural gas use, it also reduces the use of renewable and nuclear fuels and increases energy consumption overall.

In the long run, the emissions reductions achieved by shifting from coal to natural gas are offset by the impacts of reduced use of renewables and nuclear power for electricity generation, and by higher overall levels of energy consumption."

In other words, fracked gas wins a climate battle, but loses the climate war.

High frack vs giving up

In fact, a surge in fracked gas would lose the climate war so badly it would be indistinguishable from America waving the white flag and giving up completely.

The IEA has a "No GHG Concern" scenario that looks at what would happen if "no GHG emissions reduction policy is enacted, and market investment decisions are not altered in anticipation of such a policy." I've added this unconditional climate surrender scenario to the chart below as a red line. 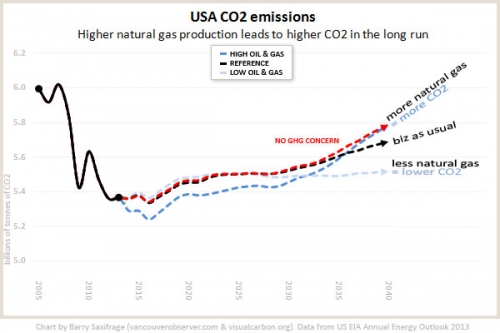 Clearly, abundant supplies of fracked natural gas are incredibly efficient at killing off climate-safe energy solutions. Mr Hyde wins out. The rest of us get fried.

Such a future -- with America's climate pollution levels higher in 2040 than today and still rising -- is a world entering a full blown climate crisis. These emissions levels exceed the International Energy Agency's (IEA) scenario for global warming of +6C. As the IEA says bluntly, this would be "a catastrophe for all of us."

Not just in America

The warnings that high levels of fracked gas will kill off clean energy and lead to dramatic climate failure reach far beyond America. I'll cover the global implications of fracked gas in detail in another article. For now I'll just leave you with this quote from a recent speech by IEA Executive Director Maria van der Hoeven:

Indeed, under a modelling scenario we ran in which global natural gas demand increases by 50 percent between 2011and 2035, global energy‐related CO2 emissions follow a path that is consistent with a long‐term temperature rise of over 3.5 degrees Celsius. That is well above the globally agreed maximum target of 2 degrees Celsius.

So while the foundation may have been laid for a “golden age of gas”, this would not be a golden age for climate.

Indeed, for countries with cheap, abundant gas supplies that are committed to fighting climate change, there will be a need for policies to defend truly low‐carbon energy sources from the economic pressures of gas.

Fracked gas is getting a huge economic subsidy by being allowed to damage our climate and acidify our oceans for free. Global energy experts like the US EIA and the IEA make it clear that as long as fracked gas continues to receive this pollute-for-free subsidy it will continue to kill off the clean energy solutions we need to preserve a safe climate.