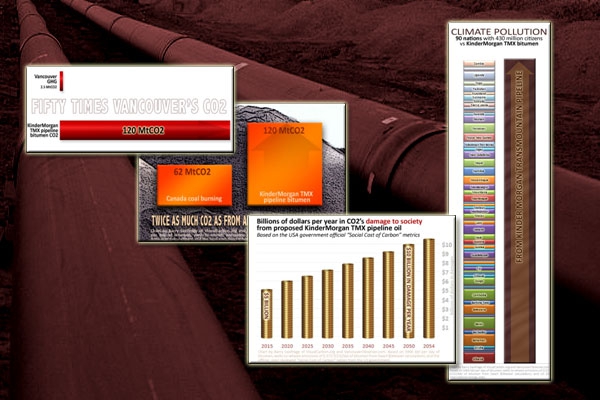 Such is the case with Kinder Morgan's recent push to build a gigantic new Trans Mountain XL (TMX) pipeline from the tar sands of Alberta to the Pacific Ocean shoreline at the Port of Vancouver.

People concerned about our increasingly dangerous climate say this will enable billions of tonnes of new bitumen to be extracted and burned. They point out -- as my four charts below illustrate -- that the resulting climate impact will be far too huge to safely ignore. They insist that climate pollution of this scale must be considered when deciding if this pipeline is in our national interest.

In response, the regulatory agency that will decide on the pipeline -- the National Energy Board (NEB) -- changed their rules since the hearings on the similar Enbridge Northern Gateway pipeline. The NEB says new laws passed by the Harper government allow it to ignore the full climate impact and to exclude anyone who wants to argue that they would be affected by it.

In just one example, 27 climate experts – scientists, economists, social and political scientists – from major BC universities applied to "lend our expertise to the NEB’s assessment of whether this project is in the public interest."

"Every one of us was rejected, because we proposed to talk about climate change."

In America, the total climate impact now gets considered for major pipelines like Keystone XL. Canada however is heading in the opposite direction.

So just how big would the potential climate impact be? Kinder Morgan's new pipeline will pump an additional 590,000 barrels of tar sands bitumen per day. Climate scientist and BC MLA, Dr. Andrew Weaver, estimated the full "wells-to-wheels" climate impact of each barrel of bitumen at 0.572 tonnes of CO2. Multiplied together yields around 120 million tonnes of CO2 per year.

To try to put that huge number into perspective, I created the following four charts.

Discussion: All the climate efforts and carbon tax payments by generations of citizens, businesses and governments in the "Greenest City" would be wiped out by just one year of fossil carbon from the proposed TMX mega-pipeline. Over the lifespan of the proposed Kinder Morgan pipeline the climate impact would equal two thousand to three thousand years of Vancouver's current emissions. Honestly, why should any of us even try anymore? Data source: City of Vancouver GHG Inventory estimates 2.5 MtCO2 per year.

Chart 2 -- Double all the coal burning in Canada 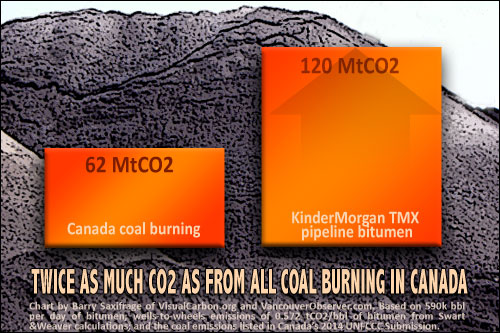 Discussion: Coal burning in Canada dumped 62 MtCO2 of pollution into our atmosphere in 2012. The increased tar sands bitumen enabled by Kinder Morgan's proposed mega-pipeline would create twice that much climate damage. Apparently in Canada you can be a key player in a project that doubles the climate damage from all our existing coal burning -- and lock that in for another forty to sixty years -- without ever having to even discuss it. "Every one of us was rejected, because we proposed to talk about climate change." Data source: Canada’s 2014 UNFCCC Submission

Chart 3 -- $5 billion in damage to society every year 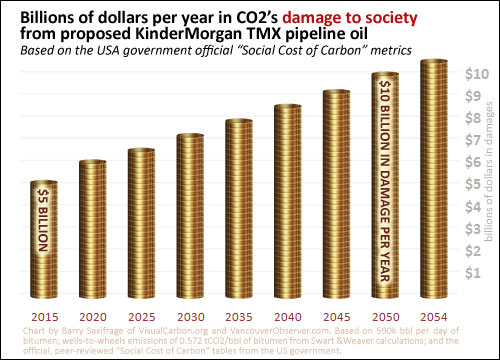 Discussion: The 120 MtCO2 that will be spilled every year into our atmosphere from the proposed Kinder Morgan TMX pipeline bitumen flow will cause a minimum of $5 to $10 billion per year in damage to human society.

Says who? The US government.

The US government calculates an official, peer-reviewed "Social Cost of Carbon." They use this figure in developing government policies. Currently each tonne of CO2 (tCO2) is estimated to create a minimum of $37 in economic costs to human society. This is also estimated to rise to $80 in damages per tonne of CO2 over the next forty years.

Because the damage per tonne rises over time, the total damage from KM TMX bitumen would also rise from $5 billion a year now to over $10 billion per year during the lifespan of the pipeline. For comparison, the most expensive extreme-weather disaster in Canadian history was the Calgary floods of 2013 when damages exceeded $1.7 billion.

However, while Kinder Morgan will be allowed to reap huge economic benefits from all this bitumen they won't be required to take any responsibility for the billions of dollars in damages that the bitumen will cause. All benefit, no responsibility, and no discussion allowed.

The social contract -- those who benefit should pay their fair share of the damages -- is broken.

The all too predictable result of this double-standard in BC has been a frenzied surge of "exempt from responsibility" fossil carbon into our provincial economy.

Discussion: Over 430 million people live in the ninety nations least responsible for the climate crisis. The combined CO2 emissions from all these people in all these nations is less than from the tar sands bitumen that will be enabled by Kinder Morgan's proposed TMX mega-pipeline. Zambia, Uganda, Tajikistan, Rwanda, Paraguay, Nepal, Mozambique, Laos, Iceland, Haiti, Guyana, Congo, Cambodia, Botswana, Albania and another 75 nations -- combined. At this stage in the climate crisis I personally think it is unfair and immoral to flat out refuse to even consider a climate impact of this magnitude when deciding whether to approve such a project. Data source: US Energy Information Agency says 90 nations with 430m people emitted 119 MtCO2 combined.