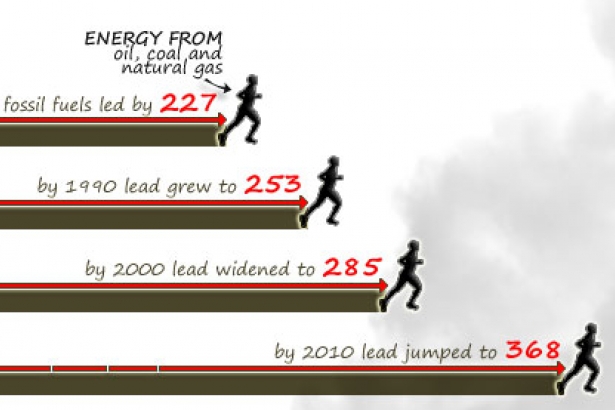 As humanity reaches for more energy, fossil fuels are being selected for five out of every six new units of energy.

The energy gap between fossil fuels and renewable energy continues to grow dramatically wider despite decades of efforts to prevent a full-blown climate crisis. Even more troubling, the gap is accelerating.

Take a look. My chart below shows global energy use by year, divided into fossil fuels vs everything else. You can see how fossil fuels have been relentlessly widening their lead, decade after decade. And the biggest leap has been in the last decade. 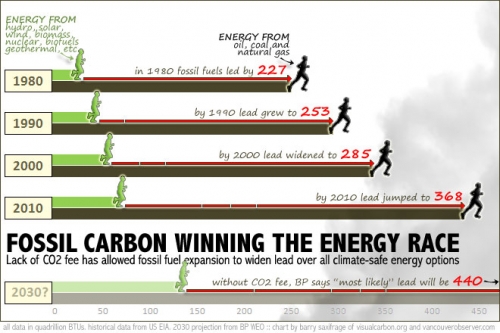 Picture a footrace in which -- decade after decade -- the "fossil fuels" runner consistently sprints five kilometres for every one kilometre the "climate-safe" runner jogs. The gap between them grows rapidly and relentlessly.

Despite all the amazing progress in the renewable energy revolution, fossil fuel's lead has been accelerating. Here is the average increase in the energy gap per year for recent decades (in quadrillions of BTUs):

Fossil fuels are kicking ass. It is becoming a rout.

Perhaps humanity's clearly accelerating preference for fossil fuels is why ExxonMobil confidently predicts that the gap will continue to grow larger and that humanity will burn every megatonne of fossil carbon the company can extract for decades to come:

"we are confident that none of our hydrocarbon reserves are now or will become 'stranded.' We believe producing these assets is essential to meeting growing energy demand worldwide…"

"Governments' constraints on use of carbon-based energy sources and limits on greenhouse gas emissions are expected to increase … [but] will not rise to the level required for the 'low carbon scenario'."

It is "highly unlikely" that humanity will act to limit global warming to the internationally-agreed danger limit of +2C.

Fellow energy super-major BP agrees. The "most likely" scenario according to BP is for fossil fuels to dramatically widen their lead by 2030. They expect fossil fuels be twice as far ahead in 2030 as they were in 1980. I've included this fry-the-future scenario in my chart above.

The ugly climate reality is plain and simple. Climate-safe energy alternatives -- wind, solar, hydro, biofuels, biomass, nuclear, geothermal and everything else combined -- are getting creamed. Crushed. Left in the dust. And nothing we have done so far has changed this dynamic. 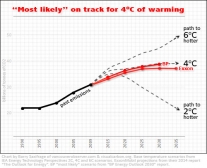 The climate implications of our on-going love affair with fossil fuels are sobering.

As the World Bank says in their "Turn Down the Heat: Why a 4°C Warmer World Must be Avoided" report:

"the world is barreling down a path to heat up by 4 degrees at the end of the century if the global community fails to act on climate change, triggering a cascade of cataclysmic changes … there is also no certainty that adaptation to a 4°C world is possible … If there is no action soon, the future will become bleak"

The good news is that multiple studies show that humanity could run our vast global society with climate-safe energy options in time to avoid a dangerous climate and over-acidified oceans.

The reason we aren't doing this is because fossil fuels have been exempted from paying for the damage their CO2 pollution causes. This creates an uneven economic playing field in which renewables -- that don't trash our climate and oceans -- can't compete.

Here is one powerful example.

The US says its climate pollution would plunge 40 percent simply by making CO2 pollution pay for a portion of the damage it causes. But without such a carbon fee, US climate pollution "most likely" will rise for decades on end at a level consistent with the IEA's +6°C scenario. (see related article: Twenty one ways America would destroy a safe climate -- and one way they won't: US govt. report)

In this USA example, consider that the needed fee on CO2 pollution is less than the damage that CO2 is known to cause:

In the USA anyway, charging climate pollution for the monetary damage  that we know it is causing would dramatically reduce the levels of climate pollution. Such a "polluter pays" concept is fair. It works. It could even be tax-neutral by returning every dollar of CO2 fees to the public via monthly cheques or income tax cuts. The net tax burden on society could be zero. And climate pollution would decline rapidly.

It is simple economics.

Even Big Oil is getting worried

Everything we've done so far to prevent a climate crisis is failing so spectacularly that even many of the fossil fuel giants are starting to get worried:

"We believe that governments must set … an economy-wide price on carbon."
-- BP Sustainability Review 2013

"Significant changes must be introduced to the global economy, or the risks of disruptive climate impacts will grow increasingly serious … This must incorporate a robust carbon price."
-- The Trillion Tonne Communiqué signed by Royal Dutch Shell plus 70 other major corporations