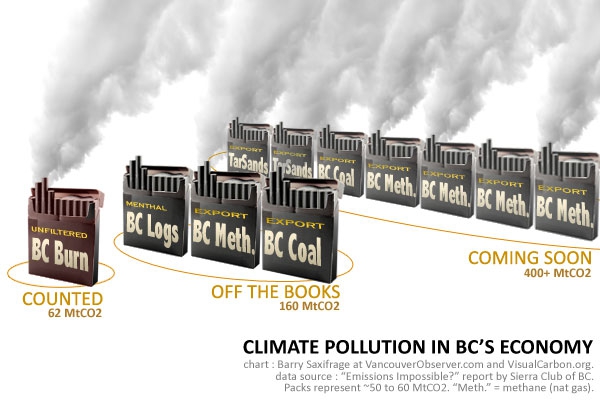 “We can fool ourselves, but we can’t fool the atmosphere.”  — Sierra Club BC Science Advisor Dr. Colin Campbell.

The claim that our BC Government is pursuing a lower-carbon economy is challenged by revelations in a pair of new reports.

The first report, "Emissions Impossible?" by 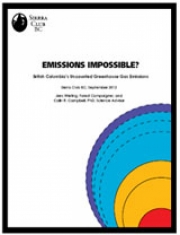 Sierra Club of BC, points to nearly four times more carbon in our economy than the BC government lists on its carbon books.

The BC government only focuses on reducing carbon that is burned inside BC. Examples of carbon kept off the books include all of BC's coal, most of BC's methane (natural gas) and emissions from BC’s forests primarily due to poor forest management and climate impacts.

Not only is the majority of carbon in our economy left "off the books" it is also left out of our low-carbon policies. The result, as the Sierra BC report highlights, is that our Clark government is acting to more than double our economy's "off the books" carbon.

For example, our Premier Christy Clark says she is "focused single-mindedly" on a gigantic increase in BC methane extraction. She brags that it will be "equivalent of two million barrels of oil a day. That is roughly the current level of production of [Alberta's] entire oil sands." Whoa. Opening a fossil fuel spigot into our climate the size of the tar sands doesn't sound low-carbon to me. 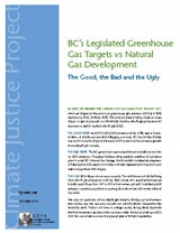 A second new report, "BC’s Legislated Greenhouse Gas Targets vs Natural Gas Development" from Canadian Centre for Policy Alternatives (CCPA), calculates that this single-minded rush to frack will create methane emissions as high as 305 million tonnes of CO2 (MtCO2) per year by 2020.

That is twenty times the climate pollution caused by all the cars and trucks in BC today. It would be seven times our entire province's target for 2020.

"Clearly, such emissions are not consistent with the spirit of BC’s GHG targets," says the CCPA report.

Oh, and then there are 18 new coal mines being planned as well. The first eight of these are projected to add an additional 34 MtCO2 to our atmosphere each year. We are piling on new coal mines so fast we have to bring in Chinese workers to mine them.

When you include all this hidden carbon, our economy is actually growing far dirtier, more carbon-dependent and more exposed to carbon risks.

BC Minister of Environment Terry Lake recently defended his government's decisions to ignore most of our economy's carbon saying that the government uses "international standards for emissions accounting."

However useful those international standards may be for international treaties—a very open question at this point—they are not designed to reveal all the carbon risks facing British Columbians. And they do not. They ignore large risks to things British Columbians cherish and depend upon—our economy, food supply, oceans, forests, infrastructure, salmon, hydro, healthy ecosystems and a stable weather system.

We know that accounting standards that hide risk create bubbles. This didn't work out for investors in Enron, dot-coms or sub-prime mortgages, to name a few. It is starting to fail big time for USA coal companies who are suddenly fighting for economic survival. It could fail just as spectacularly for a BC economy gorging itself on hidden carbon risk.