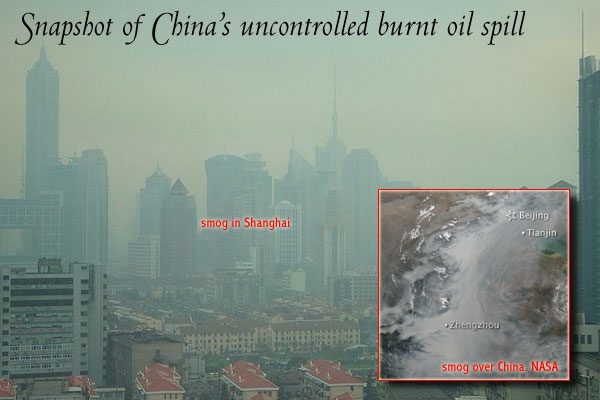 One way or the other, every gallon of tar sands crude oil that Enbridge wants to pump down its proposed B.C. pipeline will be spilled into our environment. All of it. Every drop.

Any crude that Enbridge doesn’t first spill into our B.C. lakes, rivers, streams, Great Bear Rainforest and wild coastline, will instead become a gigantic burnt oil spill dumped into our destabilizing atmosphere and acidifying oceans.

This spill will be so large that it will wipe out all efforts by all Canadians to cut climate pollution. Once spilled it will continue for centuries to turbo-charge our weather systems, over-acidify our oceans, harm people and damage the ecosystems we depend on. It takes nature thousands of years to remove burnt oil once it is spilled into our air and oceans.

So I propose we start calling this pipeline what it really is – Enbridge’s “Northern Gateway Pipeline to our Atmosphere” (ENGPA).

How big a burnt oil spill are we talking about?

The amount of new climate damage that Enbridge and a handful of private oil companies propose to pump down ENGPA and into your future air and water is 150 million tonnes of CO2 (150 MtCO2) each year. That is the “wells-to-wheels” climate pollution unleashed by pumping an additional 800,000 barrels a day of new tar sands crude into our atmosphere. And that doesn’t even count the climate damage caused by shipping the stuff half way around the world.

A burnt oil spill of this magnitude is:

Picture filling nearly a million barrels with oil. Lined up side to side they would run along the highway from Vancouver past Chilliwack, Hope, Merrit, Kamloops, Salmon Arm, Revelstoke and nearly out to Glacier National Park. You’ll have to fill 44 barrels every second during the 6 hour drive. Then imagine racing back and lighting all of them on fire. That gigantic cloud of burnt oil spilling up into our atmosphere is what ENGPA will add to our atmosphere every day if we build it. Now imagine getting up the next morning doing it all again. And then again on the next day. And the next. For decades. 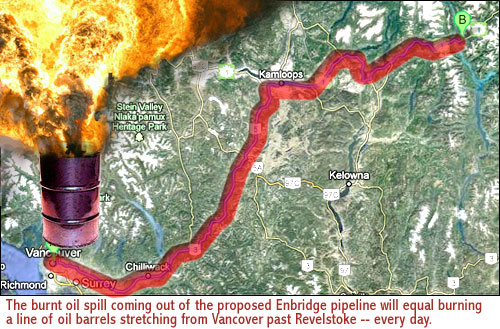 On the one hand the Harper Government says climate change is a real threat and our Prime Minister has promised the world repeatedly that Canadians will cut our climate damaging emissions by at least 17 per cent this decade. Recently the Harper Government wrote laws requiring Canadians to make big cuts in the climate damages coming from our cars, trucks and coal-fired electricity.

And yet simultaneously the Harper Government turns around and does everything they can to allow a few private oil corporations (now 40 per cent foreign controlled) to dramatically increase the climate damages they pump out of Alberta by even more.  This one Enbridge pipeline alone will unleash climate damages equal to 22 per cent of Canada’s emissions…which will more than erase the 17 per cent cut Canadians must make.

Our Prime Minister calls this rush to obliterate the climate efforts of everyday Canadians a “no brainer”. I certainly agree about the “no brainer” part … but probably not in the way Mr. Harper intends it.

So, will Stephen Harper create a double standard where he forces Canadians to cut back while helping foreign-owned oil companies operating in Canada (such as China's state-owned Sinopec and the Chinese Communist Party’s China Investment Corporation) to pig pile it on?