Barry Saxifrage
Jun 4th, 2012
Share on Facebook Share on Twitter
(Page 2 of 2)
Way back in 1964, Americans were listening to speeches by President Johnson and Malcolm X. Racial segregation was still legal and the KKK were kidnapping and killing black Americans. The Vietnam war was just getting started and Disney's Mary Poppins had its world premier. IBM's screaming hot new System/360 computer took up a fair sized room when it debuted that year. It was also a thousand times less powerful than today's iPhone. Cell phones of course didn't exist. Neither did video games, personal computers, the internet or even the ability to rent a movie to watch at home.

It was another age, and a long time ago. But as my chart below show, Americans are returning to fossil fuel consumption levels from that distant era. 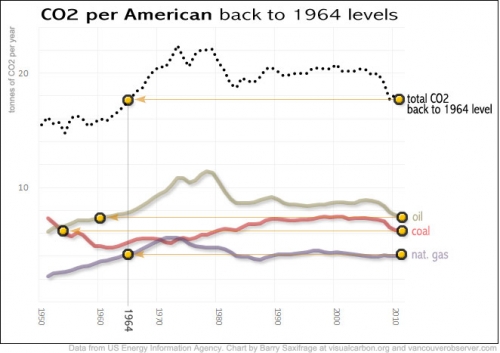 Per person, Americans are back to 1960 levels of oil consumption. Oil is the biggest source of CO2 in the USA. Now with rising oil prices, new vehicle regulations and the emergence of electric cars it looks like the USA's biggest source of CO2 will continue to fall. Considering that Americans could cut oil use in half and still use more per person than Europeans, there is clearly lots of room for big declines ahead.

Coal is the number two source of CO2 for Americans. Today the average American burns an amount similar to what they did in 1955, and even less than they did in the 1940s. Like oil, the forces aligned against coal in the USA seem to point to a continuing long term decline in coal CO2.

Historically, no nation has done more to cause the climate crisis than the USA. Today, Americans are still in the top tier of CO2 emitters per person -- along with Canadians, Australians and Saudis. The dirty four. But it is exactly America's historical role of biggest and dirtiest that makes their sharp decline in CO2 pollution so noteworthy and potentially game changing at the global level.