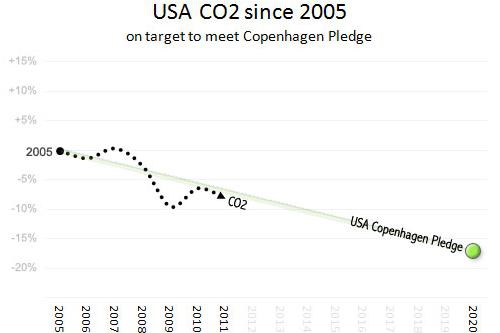 Every year the International Energy Agency (IEA) calculates humanity's CO2 pollution from burning fossil fuels. And once again, the overall story line is one of ever-increasing emissions:

"Global carbon-dioxide emissions from fossil-fuel combustion reached a record high of 31.6 gigatonnes in 2011."

The world has yet to figure out how to stop the relentless increase in climate pollution. But mixed in with all the bad news there was one shining ray of hope. One of the biggest obstacles to climate action may be shifting. As the IEA highlighted:

"US emissions have now fallen by 430 Mt (7.7%) since 2006, the largest reduction of all countries or regions. This development has arisen from lower oil use in the transport sector … and a substantial shift from coal to gas in the power sector."

How big is a cut of 430 million tonnes of CO2? It's equal to all CO2 from all Canadians outside Alberta. From a US perspective, it's equal to eliminating the combined emissions of ten western states: Alaska, Washington, Oregon, Idaho, Montana, North Dakota, South Dakota, Wyoming, Utah and Nevada.

It seems the planet's biggest all-time CO2 polluter is finally reducing its emissions.

Not only that, but as my top chart shows, US CO2 emissions are falling even faster than what President Obama pledged in the global Copenhagen Accord.

Until now, the failure by the USA to make significant emission cuts has been at the center of the global deadlock over what to do about climate pollution. Many of the biggest polluting nations -- such as China, India, Russia, Canada, Australia, and Brazil -- have been reluctant to create policies to reduce CO2 as long as the biggest bad-boy of them all, the USA, wasn't joining in.

But now, Americans are both promising CO2 cuts and actually doing it. In doing so they are leading the world in total CO2 reductions. Can they keep it up? There are many hopeful signs.

Take a look at my chart below in which I've added USA coal, oil and natural gas data. As the IEA pointed out, it is the plunging use of oil and coal that is driving the decline in CO2. 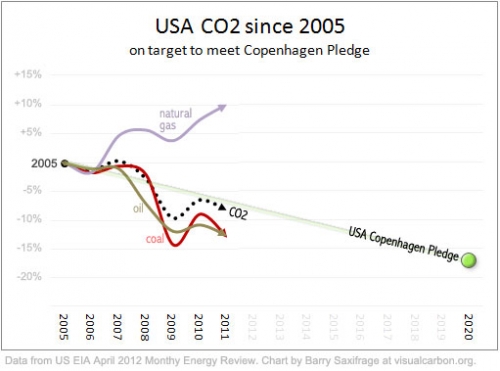 Let's take a look at the reasons why oil and coal are declining.

Coal is a "dead man walking"

Coal use in the US plunged 13 percent in the last six years as natural gas and renewables took its place.

Duetsche Bank has called coal use in the US a "dead man walkin'" saying:

"Banks won’t finance them. Insurance companies won’t insure them. The EPA is coming after them…And the economics to make it clean don’t work."

"Coal is the single greatest threat to civilization and all life on our planet. Our global climate is nearing tipping points. Changes are beginning to appear, and there is a potential for explosive changes with effects that would be irreversible"

In the USA, the Sierra Club’s Beyond Coal campaign has become a hugely mobilized and successful campaign that has helped stop 150 proposed coal plants and helped retire 110 existing coal plants. Lots of Americans are fed up with coal pollution, and many are now taking effective action. New York mayor Michael Bloomberg alone gave $50 million of his own money to the Beyond Coal campaign.

The US EPA just passed new clean air regulations that will cause the oldest, dirtiest and least efficient coal plants to shut down while also making it very hard to build new ones.

Prices for alternatives to coal -- like natural gas, solar and wind -- are falling rapidly. Even the most expensive of these, solar without any subsidies, is now cheaper than building new coal plants in some of the sunniest parts of the US.

Many forces point to a continuing decline in US coal burning.

Oil is pricing itself out of its largest market

The Americans buy more oil than any other nation on earth. But, as I wrote last year, rapidly rising oil prices are driving a big decline in America's oil use. The price of oil has more than doubled since 2005. Double the price of a commodity and people will use less.

Sure enough, the decline in US oil consumption since 2005 has been dramatic. Americans now buy two million fewer barrels of oil every day. That's like shutting off three Keystone-XL-sized pipelines.

When it comes to dollars, Americans pay attention. Maybe that is why even the auto makers stood side by side with Obama as he announced regulations forcing cars and light trucks in the USA to improve their miles-per-gallon by 40 per cent this decade. As vehicles become more efficient oil use will fall further.

Since almost all oil in US is used for transportation, the table is set for continuing declines in oil emissions too.

Here is the biggest shocker of all: the average American's CO2 emissions are down to levels not seen since 1964 -- over half a century ago.