When fossil CO2 is added to our atmosphere it takes decades to cause its maximum temperature increase. Imagine turning on a flame under a pot of water. It takes awhile for the water to get to maximum heat from that flame. As the next chart shows, a pulse of CO2 will continue to increase global temperatures for the first 30 years. The peak warming comes after about half a century and then slowly declines over centuries as the CO2 is slowly removed from the atmosphere by oceans and rock weathering. 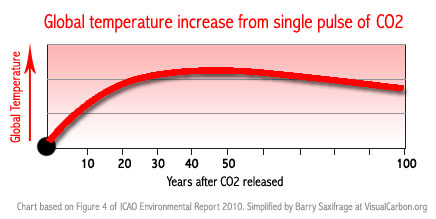 This multi-decade delay means our CO2 emissions from the past few decades still have some heating kick left in them. Climate scientists say we have more warming "in the pipeline" as a result. As I wrote last week, global warming is now increasing by 400,000 atomic bombs worth of new energy every day. The primary driver of our increasing warming is the past CO2 from recent decades.

So, even if we stopped all new CO2 emissions starting tomorrow, global warming would continue for many years. Estimates are that our past emissions will heat the climate another 0.25 C pushing the total warming to over 1C. That might not seem like a lot, but the last time the planet stayed that warm for awhile, sea levels were 15 to 25 feet higher. Hansen has a slide he shows of what Florida would like, perhaps even in this century: 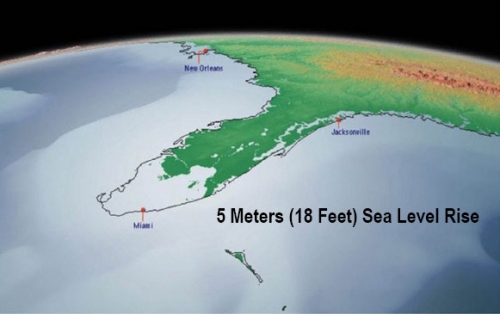 This is just one of the reasons that Hansen says that we are already beyond the safe level of CO2. He says we urgently need to work to reduce the current level of CO2 from 390 ppm back down to 350 ppm. He has a plan that could still do this in time:

Of course we can't just stop all CO2 emissions tomorrow. That is because we have invested huge amounts of money in existing carbon burning machines, engines and infrastructure that we still need or want to use. Hansen:

"Humanity today is heavily dependent on fossil fuels -- coal, oil and gas -- for most of our energy. When we realize that it is necessary to phase out fossil fuels, that transition will not be quick -- it will take at least several decades to replace our enormous fossil fuel infrastructure. In the meantime more greenhouse gas emissions and more climate change will be occurring."

The International Energy Agency, one of the world's most authoritative sources on energy markets, recently calculated how much CO2 and heating all our existing infrastructure will put out over its lifespan. They conclude that we have already built 80 percent of the fossil fuel infrastructure needed to hit 2 C. Here is their chart: 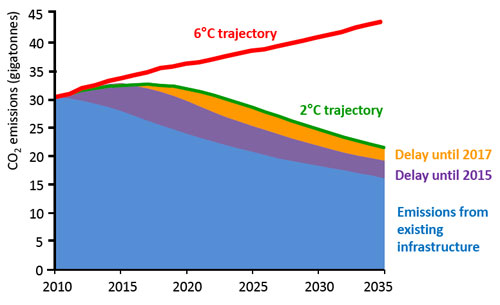 On our current path, the IEA says we are just five years away from being “locked in” to that 2C level. Everything added after that pushes us deeper into dangerous territory. In discussing the IEA report their Chief Economist stated bluntly:

"The world is perfectly on track for a six-degree Celsius increase in temperature. Everybody, even the schoolchildren, knows this is a catastrophe for all of us."

Massachusetts Institute of Technology (MIT) did their own calculations two years earlier showing that we are headed for 5.5 C by 2100. They called for "rapid and massive" action to avoid this and warned that:

"there’s no way the world can or should take these risks."

These aren't exactly hippies and treehuggers. They are some of the world's most sober and knowledgeable institutions sounding the alarm. And they are saying we are handing Generation Hot a miserable choice: either destroy a huge amount of your infrastructure or destroy your chance for a safe climate.

As Nobel Prize Laureate and SFU professor Dr. Mark Jaccard said when he was arrested recently for blocking a BC coal train:

"We are heading for a real crisis in which we’ll have to start ripping infrastructure apart."

Our "irrational carbon exuberance" is starting to inflate the mother of all economic bubbles: the Carbon Bubble. We are betting huge amounts of money on new high-carbon infrastructure and carbon deposits which can't return those investments without also pushing our climate to dangerous extremes.

And our plan is to then hand this entire growing toxic-asset mess to our kids. The same kids who will already be struggling to live on an over-heated and less-hospitable planet. Nice.

To me our political and economic actions around carbon at this point are just plain reckless and immoral. I'm convinced we have the ability to live great lives while also handing the world over to our kids and grandkids in roughly the same shape we were given it. To me that isn't a radical desire but an ancient and conservative one: to pass along a world at least as good as you found it.

If we want to do that then we need to insist that our political leaders quickly put some meaningful limits on our CO2 pollution. We certainly can't afford to let our politicians continue to talk cool while cranking up the heat on Generation Hot.