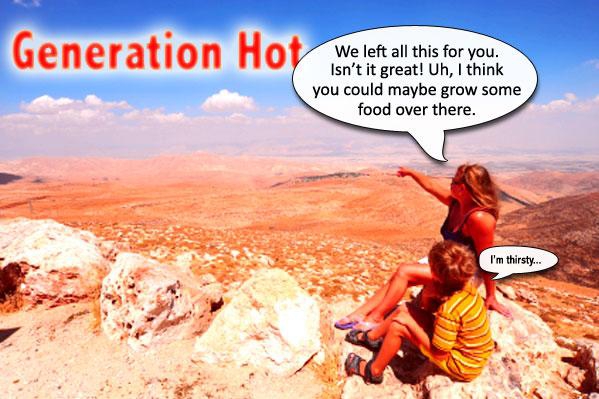 The year 1976. That was the last year our Earth was cooler than the 20th century average according to NASA. Gerald Ford was US President, Montreal hosted the Summer Olympics, the Bee Gee’s "You Should be Dancing" topped the USA singles charts, the CN Tower opened, and 60 percent of people today weren't even born yet.

In fact the last time even one month was cooler than average was February 1985. Nearly half of people alive today were born after that … during an eye-popping 326 consecutive months warmer than what used to be called "normal". Generation Hot. If you are under twenty-seven, you're one of them.

Michael Oppenheimer, a Princeton University climate scientist recently said: "A warmer world is the new normal. To me, it's startling to think that a generation has grown up with global warming defining their world."

Of course few of them are old enough to do much about it yet. They are still sitting in the back seat while we drive them to someplace a lot less hospitable.

The heat is on

As the chart below shows, global warming has been increasing dramatically during the lives of Generation Hot. The most recent decade was the hottest and includes 9 of the hottest 10 years since 1880. The hottest year recorded so far was 2010. To keep hitting heat records like that you need to be pumped up on atomic power steroids. And that is just what climate science says we have done to our weather system with our trillion tonnes of heat-trapping CO2 pollution so far. 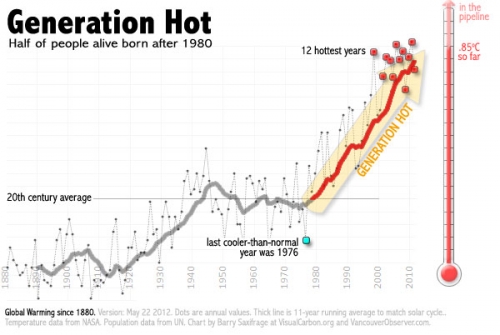 Here in BC, our government reports that we are heating up twice as fast as the global average: "All stations showed increasing temperatures from 1950 to 2006 ... [BC's] total increase of 1.5ºC during the last 50 years is higher than the global average." This warming in BC has killed off billions of trees, altered our snowfall, increased our wildfires, shrunk our glaciers, changed rainfall patterns, warmed our oceans, killed protected old-growth, shifted the plant hardiness zones, caused streams and rivers to rise earlier and even changed the flows and temperature of our mighty Frasier river.

Globally, freak summer heat waves have expanded their reach more than fifty fold across the planet. That is according to an analysis of temperature data recently published by NASA climate scientist, James Hansen.  Extreme summer temperatures during 1950s, 1960s and 1970s were so rare they covered only 0.1 percent of the planet on average. Your chance of it happening in your area was around 1-in-750. Now around 7 percent of the planet and 10 percent of the land area swelters under such "extremely hot" summer temperatures. The odds of you, your crops, your forests and your watershed being hit by an extreme heat wave have risen to 1-in-10. According to Hansen:

An important change is the emergence of a category of summertime extremely hot outliers … the large areas of extreme warming have come into existence only with large global warming.

We conclude that extreme heat waves, such as that in Texas and Oklahoma in 2011 and Moscow in 2010, were "caused" by global warming, because their likelihood was negligible prior to the recent rapid global warming…

That Moscow heatwave in 2010 was kinda unusual: 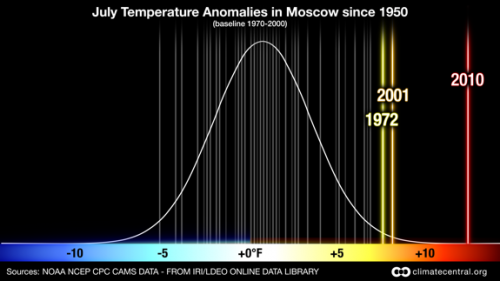 And that great Texas drought last year was hotter and drier than any year, including those of the Great Dust Bowl. In fact it was so off the charts that they literally had to make the chart bigger to fit it on: 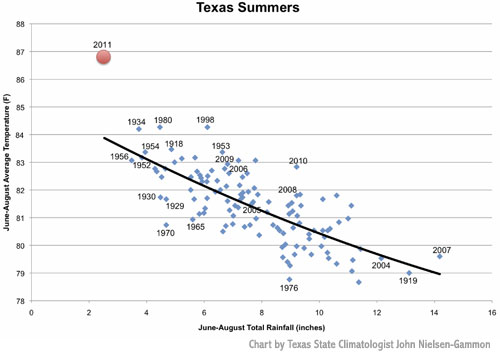 That heat and drought didn't stop at the Texas border. It cooked Mexico so bad that the government there reports that 40% of their nations' crops failed. These are the kind of "extreme heat" events that Hansen shows are moving from unprecedented to unrelenting. All this is happening with less than 1 C warming.

A lot more heat is "in the pipeline" thanks to three major drivers of future heat:

The latest studies show that the first two -- what we have already done and built -- will push us almost to 2 C of warming. The international community has repeated vowed to not exceed 2 C because it is expected to unleash very dangerous climate changes. Above 2 C, the climate science says civilization will be threatened by dangerous and destabilizing extreme weather, crop losses, rising seas and badly damaged oceans from acidification. In fact Stephen Harper joined the other G8 nations just last week to once again pledge to not breach the 2 C firewall. If Harper is worried I assume it must be really bad.

According to Hansen, 2 C is a rosy estimate based on old data. He says a study of the newest data about how the earth has reacted in the past, and how it is acting now, shows that 2 C is much too risky. He says nasty feedback loops and tipping points will happen if we stay above 1 C warming for very long.

When you add in future heat source number three -- the rate we are adding new CO2-dependent infrastructure -- studies show we are on track to 6 C and "catastrophe".

Let's take a quick look at all three.